Morro, along with Ghoultar, Bansha, and Soul Archer, journeyed to the Samurai X Cave to obtain the ninja's mech, intending to use it to ascend the Wailing Alps. Once they arrive, they were interrupted by Nya and Ronin. After a brief fight, Ghoultar possesses the Samurai Mech, turning it into the Mech-enstein.

Morro uses the Mech-enstein to climb the Wailing Alps. When the ninja arrive at the Hanging Temple, Ghoultar uses the mech to fight the Ice Mech until Zane sends both mechs flying off the mountain, into the snow below.

During a battle with Nya and Ronin, Ghoultar possesses the Samurai X Mech, turning it into the Ghost Mech (or, as it is also known, Mech-Enstein.) Morro, Bansha, Soul Archer and Ghoultar had originally gone to the cave in search of a mech that could be used to climb the Wailing Alps. The mech proves a great help to the ghosts as they make the ascent. After Ghoultar’s defeat at the hands of Zane and his Titan Mech, Mech-Enstein tumbles off the mountain and into the snow.[1]

The ghosts are able to possess machinery a well as people. Samurai X's armoured mech is transformed into a monstrous Ghost Mech, known as Mech-Enstein. The suit has a creepy bone cage for the driver's cockpit and is equipped with jet booster packs and four huge swords.

The ghost mech used to be a red robot walker belonging to Samurai X. It is possessed by the spectral power of Scythe Master Ghoultar when the Ghost Warriors invade the Samurai X Cave. From this point on, it turns a ghoulish green and goes by the name of Mech-enstein![2] 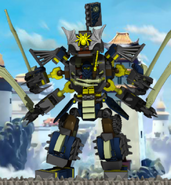