Before the creation of Ninjago

The Merlopians are a sea folk that guarded the Wave Amulet, which was given to them by the First Spinjitzu Master before the creation of Ninjago to protect the world from Wojira. They inhabit the kingdom of Merlopia under the sea.

Before the creation of Ninjago, the Merlopians aided the First Spinjitzu Master and the Islanders in a battle against Wojira. During the battle, Nyad merged with the Endless Sea and pry the Storm and Wave Amulets from Wojira's head, causing the giant serpent to fall into a deep sleep.[1]

Wu mentioned the Merlopians in a scroll and note little is known about them apart from them coming into existence before his father arrived.

Two of the Maaray Guards rode on top of a manta ray to sink the Hydro Bounty.

At the Temple of Wojira, Nya and Maya were spying on the Maaray Guards as they try to awaken Wojira. Because of the faux amulet's energy burst, it revealed the masters of Water location and they were captured shortly after.

Kalmaar eavesdroped on Nya and Maya about the Storm Amulet and attempted to force them to reveal the location of it, but was startled by Gripe, who told him that his father wishes to see him. He met his father in the throne room, who asked if Kalmaar was the one who sunk the Hydro Bounty, but he denies it with Benthomaar helping him. Trimaar allowed his son to leave. Kalmaar then goes to Gripe and told him to get answers out of Maya and Nya. Unbeknownst to them, Nya and Maya making their escape.

Gripe founded out they are escaping and some guards chase them down. Nya and Maya make it in their APS suits and escape, but Gripe told Glutinous to unleash the Ripper Sharks.

In the Temple of Wojira, Kalmaar sees the broken chains, learning that Nya and Maya had escaped, Gripe startled the prince as he tells that he unleashed the Ripper Sharks on the masters of Water. Kalmaar is upset and grabs the merservant, but Glutinous appears telling Kalmaar that the ninja have repaired their ship, Kalmaar is happy with this.

In the Hydro Bounty, the ninja are surrounded by Maaray Guards, who tell them to come with them or they would attacked, the ninja come peacefully and meet Trimaar, who is very angry with their actions.

The ninja explain all that led up to this moment and Trimaar calls his son and asks if what the ninja are saying is true. Kalmaar admits to sinking their ship and argues with Trimaar, with the prince later striking the king and lying about who the attacker was. Guards chase the ninja while at the same time, Trimaar dies and Kalmaar becomes king.

Maaray Guards searched the palace for the ninja. Benthomaar helps the ninja escape by lying to guards, they are found out and are attacked by Kalmaar and are chased through Merlopia where other Merlopians are almost hurt because of Kalmaar's reckless actions and the ninja do escape.

In the palace, Kalmaar and Gripe are searching through endless scrolls looking for the amulet, Glutinous comes in and shows the possible location of the Storm Amulet, Kalmaar agrees and tells his merservent to gather guards.

Later, after finding out that the amulet is a fake, Nya explains the situation not knowing that Kalmaar had been listening. He then blasts the door down and insults the ninja, he is then played for a fool when they try to play him with the fake Amulet but Kalmaar finds out and destroys the controls of the Hydro Bounty.

In Ninjago City, Wu, Kai, Cole, Ray and Misako confront Clutch Powers about the Storm Amulet, to which he quickly denies but soon gives it to the ninja as Kalmaar breaks down the wall for the amulet and a battle ignites between the ninja and Merlopians.

As the fight in the Explorer's Club continues, Antonia and Nelson end up with the amulet in their hands and are forced to bike away from Kalmaar and his forces. The two fail at their mission as Kalmaar takes the amulet from them and escapes.

Kalmaar is walking on the harbor as he has the Storm Amulet in his possession. He stops to imagine Ninjago underwater but is quickly stopped by Wu and the others, the ninja fail to stop him but are saved by the sea Ninja, a battle again ignited between the ninja and Merlopians, Kalmaar makes his escape but is chased by Nya, an explosion occurs with Nya appearing with the amulet. The ninja celebrate and go home.

It is found out that Kalmaar tricked the ninja and awakens Wojira. Glutinous warns the ninja of the coming disaster and the ninja start preparing to fight off the serpent. Meanwhile in Ninjago City, Kalmaar is on top of Wojira, commanding her to destroy Ninjago.

As Kalmaar attack Ninjago City, Maaray Guards help him terminate the humans, but the ninja jump in to help them. Zane, Kai, Benthomaar, and Cole fight the guards but are outnumbered. Being chased by Wojira and Kalmaar, P.I.X.A.L. asks for help from Zane. He takes Kai with him as Bentho and Cole deal with the guards.

After being attacked by the Destiny's Bounty, Kalmaar tells the sea serpent to go faster, Lloyd jumps in to help but is blasted by Wojira. The serpent then strikes the Bounty, as she is about to finish them off then Kai, Zane and Jay attack the serpent only for the missiles to prove ineffective. Nya then strikes Wojira as well and Kalmaar and Nya lunge themselves into battle.

Kalmaar and Nya start fighting while Wu and anyone on the Bounty make their escape. Wu contacts everyone else to retreat. Lloyd, Kai and Zane run into Merlopians and are forced to retreat on Wu's order. Kalmaar defeats Nya but she retreats promising to return. Kalmaar gives chase but loses track of her eventually. He finds the Destiny's Bounty thinking that he had found the ninja but the ship is merely on auto-pilot and he tells his guards to search around.

Sometime later, Kalmaar and the Merlopians are still looking for the ninja but Gripe comes along and reveals that the Commissioner may have knowledge to where the ninja are. They eventually find him, but he doesn't talk and as Kalmaar is about to blast him. After Wojira then witnesses Nya, the Merlopians jump out of the building and see Nya. Again, on Wojira, Kalmaar prepares to fight Nya.

As Kalmaar and Nya are fighting, the ninja come to help. Nya lowers her guard once she hears Jay and is disintegrated. Kalmaar proceeds to tell Wojira to attack the ninja. Jay and Wu are blown back and Jay takes his staff to go battle Kalmaar. Meanwhile, Maaray Guards come to help their king, a battle ignites between the two teams.

Jay is eventually defeated by Kalmaar and is about to be finished off but Benthomaar jumps in time to kick Kalmaar. Jay is dropped back onto building with the rest of the ninja meanwhile the sons of Trimaar are battling. As Kalmaar overpowers Bentho, he pushes his adopted brother off Wojira telling him to “bow down to his king”. Benthomaar throws one of his shots and breaks Kalmaar's trident, severing his connection to Wojira. The serpent proceeds to throw Kalmaar and swallow him. Wojira notices the ninja and is about to attack and the guards start to retreat. It can be assumed they traveled back to Merlopia.

The Royal Family of Merlopia has purple skin with a pink tinge. They have two tentacles around their mouths that resemble a mustache. From the sides of their heads, two skin formations emerge at the top, with five growths connected by translucent blue membranes. The same formation is also on the back of their heads. They have a number of small sharp teeth in their mouths. Their chests and abdomens are bright blue with marked abdominal muscles and they have five tentacles instead of legs. The eyes are different colors.

Civilians are very reminiscent of the Royal Family, but they are gray. They also do not have tentacles, but the legs and their skin growths on the head are smaller.

Some other Merlopians, mostly Maaray Guards, are black in color and have an eel-like body with legs and cyan eyes, teeth, and body and head parts. Some individuals also have green color parts instead cyan.

The culture of the Merlopians seems to be relatively primitive and more similar to Ninjago from the past. However, they are still much more technologically advanced than the other guardians of the Amulet of Wojira, the islanders.

They live in the kingdom of Merlopia near the Tartarus Trench, the deepest trench at the bottom of the Endless Sea. Despite the fact that they are amphibians, there is an air in the interior of their homes, although at least the palace can be flooded with water.

Their technology, as mentioned above, is relatively primitive and does not reach the modernity of major cities on the mainland, such as Ninjago City. However, they still use some water-filled panels that respond to touch and control various functions, mostly automatic door opening. They also have scientists and physicians and write their knowledge in the sea scrolls made of unknown material, although they probably don't know the classic books.

Merlopia is an absolute monarchy, with a king at the head of their nation, also known as the ruler of the Endless Sea, suggesting that he claims the right to rule the entire ocean. He also has absolute power over the entire army of Merlopia, whose duty is to carry out all his orders. If the king dies, his son becomes the successor in his place, although it is unknown whether it can also be a daughter. It is currently unknown who is in charge of the monarch.

Merlopians live in peace with the surface-dwellers such as humans, and do not enter their territories, probably unaware that their existence is considered only a legend. However, this peace seems to be fragile, and as soon as the ninja entered the territories of Merlopia, they were arrested and brought before the King.

Unlike the surface-dwellers, they use no motor vehicles and are only transported on undersea animals, especially on the backs of manta rays. There are also many directed sea currents in Merlopia, which speed up their traffic.

The currency in Merlopia is pearls, as Trimaar placed them on Undersea Biscuit on the Royal manta races.

Among the most famous legends of the Merlopians is the legend of Nyad, the first Elemental Master of Water, who rode on the backs of whales and defeated Wojira before time had a name.

The traditions in their kingdom include mainly the Royal manta races, which are races in which the Merlopians probably race on the backs of their manta rays. 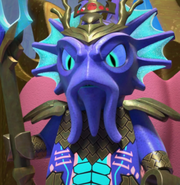 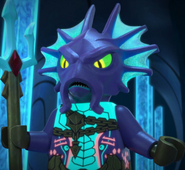 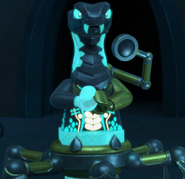 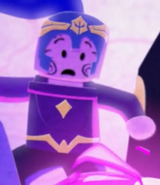 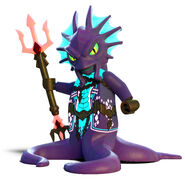