View source
watch 01:25
Jurassic World: Dominion Dominates Fandom Wikis - The Loop
Do you like this video?
Play Sound
“Good technology should make the impossible seem possible. It should seem just like... like magic.”
— Milton Dyer to Bob the Intern, "Dyer Island"

Mark Hildreth
Milton Dyer is a former programmer for Vast Industries. He created many classic video games like Lava Zombies, Conic the Ratboy, Counter, and Turbo Street Brawler. His favorite game was Prime Empire and believed that it was like magic and was a portal to another world.

While on Dyer Island, his first test subject, Scott was trapped in Prime Empire while testing out the game. Due to Scott's disappearance, Milton Dyer was forced to shut the game down by Vast Industries and retired.

When the ninja visited his private island and talked to Bob the Intern, they assumed Milton Dyer was Unagami, the ruler of Prime Empire. After P.I.X.A.L. found Dyer himself (and Jay finding Unagami within Prime Empire), they both learn that Unagami was the game itself.

Eventually, Unagami manages to create the Manifestation Gate, seeking Dyer. Jay and Dyer meet Unagami at the top of Borg Tower, and eventually make amends, with Unagami releasing everyone previously trapped within Prime Empire, along with NPCs.

During his childhood, Milton frequently went to Buddy's Pizza where he became inspired to become a video game designer, a decision that disappointed his parents, yet they accepted it regardless.

Milton eventually became the head of Vast Industries and went to live in an isolated island that's filled with booby traps along with Bob the Intern. He had several plans for other games such as Fist to Face 4 and Ukulele Legend but Prime Empire was his favorite. He eventually made a video of him about Prime Empire after he finished making the game, however, during the video, a flash of light appeared and went to go check it out.

During beta testing of Prime Empire, Milton Dyer brought in a gamer known as Scott to test out the game. While Milton stepped out for a bit, he came back to find Scott gone, and Unagami, the A.I. of the game, having sent him into Prime Empire. Due to this, Vast Industries panicked and forced Milton Dyer to shut the game.

When the ninja and Krag were heading to the Castle of Ice on the Land Bounty, Jay was playing Lava Zombies, a video game created by Milton Dyer, and tells Krag about it.

Witnessing Prime Empire's resurfacing, Gayle Gossip explained how the game was shelved due to an undisclosed incident at Vast Industries. She wondered if Milton Dyer was responsible for the resurfacing and wondered why now.

The ninja entered the Dyer Island where they fought the security systems until Bob the Intern turned the system off. They asked to speak to Milton Dyer, and Bob the Intern explained that he disappeared. He showed them the video that he made on the day he finished Prime Empire, showing him explaining Prime Empire before seeing a flash of light. After hearing that Milton Dyer wanted revenge on his bosses and that a mysterious villain brought back Prime Empire, the ninja assumed he is Unagami and realized they had to stop him before other people disappear.

Upon learning from Milton's estranged friend where he was, Zane and P.I.X.A.L. arrive at Buddy's Pizza, only to be ambushed by the Mechanic, who takes Zane hostage. When she discovers a secret passageway to the rooftop, P.I.X.A.L. finds Milton, feeding pigeons and chicken before she accuses him of being Unagami. But he reveals to her that Unagami isn't him, but an AI that was originally called Unfinished Adventure Game I.

While inspecting the Mechanic's old base, Milton explained to P.I.X.A.L. about Unagami and Prime Empire. Upon Wu sending his location to her, P.I.X.A.L. brings Milton along to where they find Zane and Wu held captive by the Mechanic before becoming intrigued by P.I.X.A.L.'s programming for her well-being of another before she tells him that she is a living being, just like Unagami.

Once the Mechanic had completed his task and fled, P.I.X.A.L. has Milton untie Wu while she tried to unplug Zane from the gate before Jay arrived and helps. Jay then comes up with a plan to bring Unagami to Milton by heading to the top of Borg Tower. Along the way, they were slightly delayed by Ritchie, but manage to incapacitate it, steal its vehicle, and drive over to the tower with it. Upon reaching the rooftop as Jay explains how he relates to Unagami, Milton confesses that he was at fault for his own mistakes, and wishes for Unagami to forgive him. Touched, Unagami, turning into a human child, accepts Milton's request to free the players, but he also decided to free the NPCs that choose to come to Ninjago. They later walk into the sunrise, hand in hand.

Unagami and Milton Dyer worked out a few kinks for Prime Empire, making it safe to play.[1]

He was present at Nya's memorial.

Why was Milton Dyer’s video game shut down?

Imagine you’re a brilliant video game designer, a legend in the gaming community, and you work your tail off to create the best game you’ve ever designed. And it works! Then, during the final stage of development, you ask your assistant to test the game. And then something happens – something so terrible that the project gets shelved, the game shut down, and you, the creator of the game, disappear. That’s exactly what happened to the legendary Milton Dyer. What went wrong that fateful day his assistant Scott went to test the Prime Empire game? What happened with that arcade cabinet? We have so many questions, and a feeling in our gut that we wouldn’t like the answers. Do you dare to imagine what’s behind the mysterious shelving of Prime Empire?[2]

Milton Dyers created Unagami a few years ago before it was unfortunately shut down, Unagami believes that his maker abandoned and tries for years to come to the real world. When he finally comes, he tries to get revenge on Milton Dyer, however Milton Dyer tells Unagami why he had to shut him down. And after they make up. Milton Dyer asks Unagami to come live with him, as a son. And Unagami agrees, the two live happily together ever since. 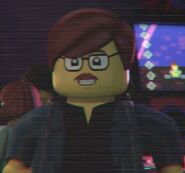 Milton Dyer before going into hiding

Milton Dyer asks Unagami to come home with him 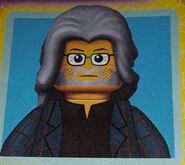