View source
“P.I.X.A.L., the submersible combat crafts you've been developing. How soon can you have them ready?”
— Wu to P.I.X.A.L. in "The Calm Before the Storm"

Ninja (except Nya and Jay)

The Calm Before the Storm
71754 Water Dragon

Intact
The mini submarines[1] are small submersible combat crafts used by the ninja.

P.I.X.A.L. is working on one of them, but it sets on fire, and Lloyd puts it out. The other three are also seen.

Zane, Kai and Cole enter battle using their mini submarines and fend off the Merlopians. Kai and Zane attempt to damage Wojira, but to no avail. However, they are able to successfully hit its neck.

Jay's sub car powers down and begins flooding. He tries to break open the cockpit, but to no avail. Luckily, Benthomaar and Cole, in his mini submarine, arrive and save him. Kai and Zane, in their mini submarines, retreat, and they arrive at the Ninjago News Center, where they hide the vehicles.

The mini submarines can travel underwater and fire rockets. 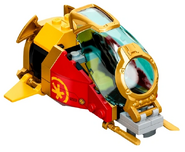