Ninjago Wiki
Register
Don't have an account?
Sign In
Advertisement
in: Ninjago: Masters of Spinjitzu, Artifacts, 2019,
and 3 more

View source
watch 01:33
Wiki Targeted (Entertainment)
Do you like this video?
Play Sound
“
It seems to show us our greatest fears.
— Lloyd in "The Explorers Club"
„

Intact
The Mirror of Fears is a mystical mirror which shows the greatest fear of anyone who looks into it in its reflection. It is currently located in the Explorers Club.

At some point, the mirror was found by an archaeologist from the Explorers Club and placed in their artifact collection.

When Lloyd, Zane, and Nya break into the Explorers Club to steal the second Scroll of Forbidden Spinjitzu, they encounter the mirror amongst many other dangerous and quirky relics. When Lloyd looks into its reflection, he sees his father, who he fears becoming like. From this, he determines the mirror shows them what they feared most. In its reflection, Nya sees herself as normal, having never unlocked her True Potential, while Zane sees himself as purely robotic, with no traces of his humanity. Lloyd warns the others that none of these reflections are real and urges them to move on.

When a person looks at their reflection in the mirror, rather than see themselves, they see the embodiment of their greatest fear. 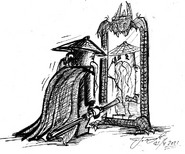