View source
“Mister Cuddlywomp... is a teddy bear I used to love when I was five, but now he's totally lame and—”
— Jay, "The Attack"

Damaged
Mister Cuddlywomp is a teddy bear Jay had slept with ever since he was a young child.

When Jay was five, he was given Mister Cuddlywomp, possibly as a gift from Ed or Edna.[1] He has slept with it in bed ever since.

Mister Cuddlywomp was in a box while Jay, Cole, and Zane were playing around with the Slow-Mo Time Blade. The ninja were trying to get rid of old boxes, so Cole decides to throw an empty box into the air, freeze it in time, then slice it. Unknowingly, the box he chose contains Mister Cuddlywomp. As Cole slices it, he rips open Mister Cuddlywomp's body, exposing its stuffing. Zane notices it, saying the box was not empty, and Jay screams seeing his childhood toy ruined. He tries not to get embarrassed by his friends saying he liked Mister Cuddlywomp when he was five, but Cole responds that he knows Jay still sleeps with it. Jay replies that he does not care who knows, and he proceeds to cuddle Mister Cuddlywomp in his arms. After criticizing Kai and Nya for their research after gaining the Time Blade, Jay, Zane, and Cole decide to run at each other and see if the Time Blade will slow them down before they collide.

Prior to Superstar Rockin' Jay

As players started entering the resurfaced video game known as Prime Empire, the League of Jay, a group that follows Jay, was formed inside the game. They decided their password would be Mister Cuddlywomp, named after Jay's teddy bear.

Inside Prime Empire, Kai, Cole, Nya, and Lloyd are guided by Beta Jay 137, Dee-Jay 81, Jaybird 64, and Jaywalkin 238, but they end up fighting against Unagami's aerial drones. Beta Jay 137 tells Nya to go thirteen blocks northwest from their current location and give their passcode to their ally, Scott if she and the other ninja want to meet Jay.

Outside Scott's garage, the ninja come across Scott, who aims a laser gun at them. Cole struggles to remember the password, but Nya says it, bringing Scott's guard down and allowed them to enter. 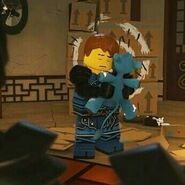