Ninjago Wiki
Register
Don't have an account?
Sign In
Advertisement
in: Articles without an appropriate picture, Magazine, Ninjago: Masters of Spinjitzu,
and 2 more

View source
watch 01:33
Wiki Targeted (Entertainment)
Do you like this video?
Play Sound
“
You desk dwellers could have told us that to begin with!
No reason to be rude – unless you have rudeness accreditation that is?
— Kai and Gleck
„

Monstrous Mission! is the 67th issue of the Ninjago Magazine. Lloyd and Cole appear on the cover, and the comic, written by Jan Dinter, is called Order Must Prevail!. 892067 Digi Kai (a Digi Kai minifigure with a prime controller weapon) is included. It was released in September 2020.

Zane and Kai are conferring about what to do about the Skull Sorcerer and agree they need more information on the villain. They ask Gulch where they can get some and he refers them to the Cave of the Wise. The two make their way to the Cave. Kai asks the Geckle at the desk for anything on the Skull Sorcerer. He agrees, provided they have the correct form. Kai is puzzled, before the Geckle tells him that in, order for the information to be processed, they need to go to Hall 9 for a formal request form.

The two ninja make their way to Hall 9, retrieve the correct form and return to Mr. Wise. However, he tells them the form needs to be stamped. He sends them to the Stamp Cavern, but once they get there, they are told they need an application for a stamp to be applied. At this point, even Zane is losing patience. They begrudgingly go to the Request Gallery to retrieve an application. Kai angrily asks for an application, but is unsure which one he needs. He slams his head on his desk, saying he needs one for an information request form, of which Gleck finds the necessary paperwork.

With the form stamped and completed, Kai and Zane return to the Cave, only to be told a processing fee is required; four and a half barrels of rare blue moss-milk. The two make their way down to the cave with barrels in tow. They theorise what could be in such a cave, but they find that the roots that descend from the ceiling move around like tentacles. They get to work scraping the Moss Milk from the walls. As they work, they hear something behind them. They turn to see a Magma Monster approaching them. The two use their Spinjitzu to defend themselves against the creature. They succeed in breaking his arm off, but they find it uses the lava to regenerate the lost limb. Kai decides to use his Fire power, but the monster simply swallows the attack. Zane tries Ice, but that has no effect either.

Kai has an idea to throw the barrels to the root tentacles. They lift the barrels up into the air and lure the monster over underneath them. Once it’s in position, they use their powers on the tentacles, dropping the barrels and knocking the Magma Monster out cold. While it’s out, they quickly fill their barrels with the milk they require.

They make their way back to Cave with the barrels required. Tired from running around, they ask for the information they wanted from the start. The Geckle gladly tells them that the Skull Sorcerer performs magic with the help of a magical skull. Zane, broken after the day’s events, resorts to sarcasm, telling the Geckle they already knew that. Kai pushes for more information, but the Geckle tells them they’ll need more forms for that, to which the two ninja collapse in frustration. 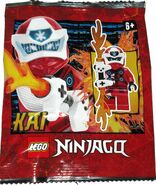