You may be looking for the set, the Ghost Dragons, or the Wind Dragon.

“Looks like your Master of Wind just caught his second wind.”
— Nya referring to the Morro Dragon, "Winds of Change"

Winds of Change
70736 Attack of the Morro Dragon

Summoned by Morro
Morro's dragon[1] was a corrupted version of the metaphysical Energy Dragon.[2][3] It could be summoned at will by the cursed ghost, Morro while he was in possession of Lloyd's body.

After the ninja and Wu evaded Morro by escaping in the Destiny's Bounty, the Master of Wind summoned Lloyd's Elemental Dragon, now as corrupted as its master, to pursue them.

Morro soon caught up and boarded the Bounty. After Wu threw his staff overboard, Morro summoned the dragon again and used it to catch the falling object. He then flew to a biker tavern where he deciphered the message engraved on the staff and used the dragon to fly to the Library of Domu.

Following Morro leaving Lloyd's body, he lost the ability to summon Lloyd's dragon, having not conquered his own fears, which would allow him to summon his own elemental dragon.

Morro’s green, spectral dragon is in fact the spirit of his former Elemental Dragon of Wind. Like Morro, the dragon was condemned to reside in the Cursed Realm for eternity, but it escaped with its master. Morro was able to summon the dragon at will to do his bidding.[1]

The Morro Dragon in a promotional poster for Possession from Cartoon Network Africa. 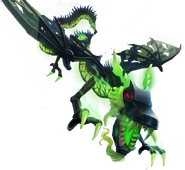