View source
watch 01:25
Jurassic World: Dominion Dominates Fandom Wikis - The Loop
Do you like this video?
Play Sound
“You're not gonna like it, but this is the truth. Everything around you, all of this, everything you think is real, it's not. Prime Empire, the Speedway Five-Billion, Terra Technica, all of it. It's part of an incredibly complex video game, and you're part of that game, too.”
— Lloyd to Racer Seven, "Racer Seven"

During "Game Over," Unagami used the Manifestation Gate to open a portal to reality and released his creations on Ninjago City, creating havoc. Some NPCs like Okino chose to defend the citizens from harm.

After Jay helped Milton Dyer and Unagami reconcile, Unagami released the players at Dyer's request and he agreed while also releasing the characters from the game to live out free and real lives in Ninjago. As a result, the NPCs are now no longer made of code,[2] except for the Red Visors and Whack Rats who went back in the game.

This colorful collection of NPCs are all-in game characters that Unagami relies on to do his dirty work. Sushimi is a chaotic, cleaver-throwing chef in the final Empire Temple of Madness level. The Whack Rats Richie and Hausner are street warriors who ride on rocket surfboards![1] 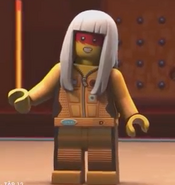