View source
watch 01:25
Jurassic World: Dominion Dominates Fandom Wikis - The Loop
Do you like this video?
Play Sound
“You said we have a responsibility. It's our job to let people know what's happening.”
— Nelson to Antonia, "The News Never Sleeps!"

David Raynolds
Nelson is the honorary Purple Ninja of the ninja team. He broke both of his legs while rigorously training to be a ninja,[1] but eventually, they healed. He later got a job as a paperboy, becoming friends with Antonia in the process.

Dareth arranged for the ninja to visit Lil' Nelson and make him an honorary ninja for a day. The ninja stopped by on their way to stop Clouse, remembering their lesson to "not put off what can be done today." However, due to Kai's addiction to his fans, he alerted them about their location and ended up being surrounded.

A fellow fan himself, Lil' Nelson dons a hand-made gi, becomes the Purple Ninja, and helps the ninja by blocking the fans so they can escape to the roof. Lloyd expresses his gratefulness in his assistance, but Lil' Nelson says that he is grateful his wish was granted, thanks to Lloyd and the ninja.

On his first day of delivering newspapers, Nelson wakes up early and gets ready quickly, even before his mother woke up herself. Just as he was about to leave on his bike, his mother gives him his helmet. Putting it on, he leaves for Ninjago City.

When he arrives, Antonia is instructed to lead him. While they deliver newspapers, the Elemental Cobras invade the city. Antonia decides to continue delivering the news.

When they finished delivering the newspapers, Antonia and Nelson went to the Monastery of Spinjitzu and told Wu about what happened to the ninja.

Nelson delivers a newspaper with Antonia.

Nelson is Antonia's dance partner in dance class. He and the rest of the class watched in amazement as Jay showed off his moves.

Gayle Gossip interviews Nelson on his opinions of Prime Empire. He called it "the greatest game ever" and talked about his mom playing it and not returning since.

When Nelson gets a chance to play, he reaches level 13 and enters Prime Empire.

Nelson is seen among the crowd of spectators for the Speedway Five-Billion.

Nelson stands right next to Avatar Pink Zane at the Speedway Five-Billion.

Nelson is freed from Prime Empire.

Nelson and the other paperboys were getting ready for their rounds, and he was shocked when he heard of Antonia's decision to leave. He then attempted to persuade her to stay while the two delivered their newspapers, to no avail. He then became upset, but the two quickly reconciled.

Nelson later assisted Antonia in keeping the Storm Amulet out of the hands of Kalmaar, who chased them. The two avoided Kalmaar using their bikes, but eventually he managed to catch up and take the amulet.

Nelson watched Antonia as she dived into the river and saved Kai, and he helped push the water out of his lungs. He and Antonia are later thanked by Wu, Ray and Cole for their actions.

Antonia then informed Nelson that she changed her mind and decided to stay, much to his surprise.

Nelson was seen walking around the arcade, and later cheering for Jaya.

Nelson was one of the many people who attended Nya's memorial.

A digital copy of Nelson is seen in the crowd.

Nelson was at the Ninja's trial, sitting next to Antonia.

Nelson is a boy with light brown hair combed to the side. He has a generic child's face from LEGO City, although he doesn't have the freckles he has in sets.

In Season 6, Nelson wears a self-made purple gi and has leg casts, due to his injuries.

Since Season 11, Nelson is shown to be a little taller, wearing a purple sweatshirt with white Ninjago letters "PN" for "Purple Ninja," and light blue pants. While working, Nelson wears a green backpack.

Nelson was a young boy who was visited by the ninja in hospital. He helped them leave the hospital by holding off their fans. In gratitude, Lloyd named Nelson “Ninja for a Day”. 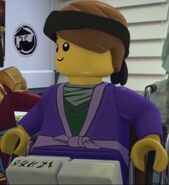 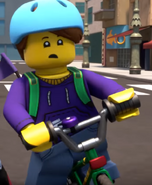 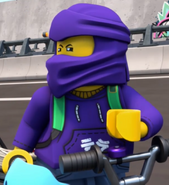 His SotFS with mask on

With Antonia in "Let's Dance"