Ninjago Wiki
Register
Don't have an account?
Sign In
Advertisement
in: Ninjago: Masters of Spinjitzu, Ninjago, Real-Life Articles,
and 12 more

Netflix is a streaming service available worldwide. It was founded in 1997, starting as a DVD rental service, moving to streaming film and television in 2007. Ninjago is streamed globally on the service, with availability varying between countries. An exclusive "Happy Birthday" special mini-episode was also formerly available to watch.

"Happy Birthday to You!" 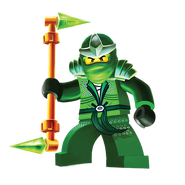