Neuro is the current Elemental Master of Mind and was a competitor in Master Chen's Tournament of Elements. Though wise and insightful, Neuro could be distrustful and selfish, especially towards the other fighters. When Chen's true plans unfolded, Neuro joined the Elemental Masters to reclaim their powers but failed to prevent Chen's followers from becoming fake Anacondrai.

After regaining their powers, the Elemental Masters united against Chen's army at the Corridor of Elders. Neuro and his allies were being overwhelmed until Garmadon sacrificed himself to the Cursed Realm to end the Second Serpentine War, cursing Chen and his followers.

Months later, Nadakhan imprisoned Neuro and the other Elemental Masters in the Djinn Blade.[1] When Jay made his final wish, recent events were erased and Neuro was freed.

After the supposed demise of the original Ninja, Neuro and many others joined the Resistance in a bid to resist Lord Garmadon's oppressive rule. After getting the support of Ninjago City's civilians by stopping hunt on their allies and Lloyd's speech on TV, Neuro was caught during an ambush on the Resistance base and sent to Kryptarium Prison. Sometime after that, the Resistance members and prisoners of Ultra Hunt, including Neuro escaped Kryptarium to help the Ninja before they succeeded in freeing the city.

Neuro was one of the participants in the Tournament of Elements who boarded the boat with everyone else.

Neuro was among those who succeeded in acquiring a Jadeblade.

Neuro fought against Bolobo in the Tournament and faced problems with being trapped in vines from Bolobo's control of Nature.

However, Neuro was able to break free and defeat him by obtaining the Jadeblade. His victory allowed him to be one of the competitors who advanced through to the next round.

When the Ninja asked him to help, he already knows their reason for seeking him out but refused to help as they were competition until Lloyd told him to read his mind and see why he should help. Doing so, he saw Chen stealing Karlof's power and was shocked to find out that was what Chen is up to. Lloyd tells him it was only a matter of time before Chen steals his power as well and Neuro accepts their offer to join them.

Later, he attempts to read Chen's mind but Clouse halts him and questions if he's helping the Ninja. He denies this but secretly reads his mind. He then reports to the Ninja that Clouse is keeping a secret, which is an ancient spell to re-awaken the Anacondrai, involving stealing all the Elemental Powers for the spell to be completed.

Despite being on the Ninjas' side, Neuro acted as an enemy until they could convince the others of the truth. He was still interested in being on a winning team and was angered by having his room taken away, resulting in being one of the contestants who joined Chamille's team in the Thunderblade race and electrocuted by Jay shortly after the race started.

He later joined the Ninja after they have convinced the rest of the contestants (except Chamille, Tox, and Shade) about the real purpose of the Tournament while explaining to Jay he wanted to be on the winning side.

Like the others, he became interested in Chen's staff when Chen lied and promised the winner of the Tournament it as the prize. Lloyd, however, was horrified by Chen's lying and blurted out Neuro reading Clouse's mind, which causes him to glare at the Master of Mind forcing him to state he doesn't remember what he saw. Later, he got into an argument with Skylor, who purposely stated he could be the spy. He later became convinced Shade was the spy, along with the others.

For the next round of the tournament, Neuro and the other remaining fighters boarded a blimp and were taken high above the island. Due to his fear of heights, the master of mind became increasingly uneasy until he couldn't take it anymore and burst inside the cockpit, only to find it on autopilot. Using the television screen, the fighters were informed by Chen what the objective of the next round was; parachute down to the island to find Nya, and the winner would automatically advance to the final round. Quickly seizing a parachute, Neuro was able to use it. A few seconds later he landed safely on the ground and began searching for Nya.

However, upon arriving on the island, Neuro was captured by Chen's men and thrown in a Vengestone prison along with the other Elemental Masters except for Lloyd (who evaded capture) and Skylor (who was the spy). He witnesses Kai being thrown in the cage by Chen and sadly looks at him knowing what fate awaits them later.

After his capture, he and the other captured Elemental Masters were put in Vengestone shackles as they were brought before Chen. While the other masters lamented the fact that they didn't heed the Ninjas' warning about the villain, Neuro remarked that it took all of them being defeated to bring them together noting on how it was too late. The prisoners then had their powers drained by Chen.

He, along with other masters (except Kai who was given a reprieve by Skylor), was taken to the Noodle Factory to work on making Master Chen Noodles. There, they allied themselves with the rest of the Elemental Masters and Dareth to build a Roto-Jet and escape from the factory. After completing it, the elemental masters used the jet to break through the cultists and Clouse's pet serpent before disrupting Chen's spell. They battled alongside Kai, Skylor, Master Garmadon, and Nya against Chen's forces.

After the staff was destroyed, everyone regained their powers and they defeated and captured most of Chen's forces but Chen, Clouse, and a select few henchmen escaped with Skylor as their hostage. With Chen gone, for now, the Elemental Masters seized control of his island and capturing most of his army, but Skylor was nowhere to be found. Immediately, the Ninja ordered the Masters to search for Skylor.

Neuro and Griffin Turner stood guard over Chen's captured henchmen, as Turner states he could win Jay's game show before Neuro gets a mental message from Skylor to tell them of Chen's new plan and has Turner relay the message to Ninja.

When Chen's forces transform into Anacondrai, Neuro and the other Elemental Masters try to hold them off but are overwhelmed, Neuro is knocked down but Shade comes to his aid and he alerts him of Anacondrai behind him. Neuro and the other masters retreat and hold the door to prevent their enemy from entering the palace.

They soon bear witness to Chen and his forces escaping in the Roto Jets to conquer Ninjago while leaving the elemental masters stranded on the island with no means of escape. The Elemental Masters then bear witness to the arrival of Zane on the Titanium Dragon stating he has faced his fear before Kai and Skylor arrive on the Elemental Fire Dragon supporting Zane's words and stating they could all do it.

Motivated by this display, the elemental masters created their own Elemental Dragons with Neuro creating his own Elemental Mind Dragon and leaving to face Chen's army.

The Elemental Masters arrive a day after Chen to find that he has not attacked and are told by Lloyd to keep watch over the city.

Later on, Neuro and the other masters stand ready to hold off Chen and his forces who have gathered in noodle trucks but they are surprised when the trucks scatter to various locations. They each pursue a truck only to find them empty and realize Chen separated them to invade without hindrance. The revelation that they put many people in danger causes them to lose control of their Dragons.

After being separated by Chen's impostor Anacondrai army, Lloyd met up with him, both driving noodle trucks, as they could not use their Elemental Dragons. Neuro reported to him of the direction where Chen was heading and he tried to stop them but as he is just a mind reader, he couldn't help the people. He was then asked by the Green Ninja to send a message to all of the fighters, telling them to meet up in the Samurai X Cave. At the cave, he thanked everyone for receiving the message and listen as Wu tells them they would make their stand in the Corridor of Elders.

He then fought in the battle at the Corridor of Elders before watching the Anacondrai Warriors being banished to the Cursed Realm. At the end of the battle, he and the other Elemental Masters celebrate with the Ninja, promising to offer future aid.

The following events were erased due to Jay's final wish, and thus, did not happen in the current timeline.
Sometime after the conflict, he was visited by the Djinn pirate Nadakhan who was hunting the Elemental Masters. It is unknown what Neuro wished for, but he was ultimately trapped in the [[[Djinn Blade]] off-screen. As a result of Jay's final wish, recent events were erased and he was freed with no memory of his imprisonment.
The following events occurred after Jay made his final wish, and thus, happened.

When Lloyd, Nya, P.I.X.A.L., Misako, and Dareth were rescued, Neuro was the first introduced by Skylor. Later, he helps Nya build something.

The Resistance watched as Lloyd lead Dareth in a fight against Karlof. When Karlof won, Lloyd suggests they make a plan.

When trying to get into Borg Tower, Neuro uses a "mind trick" on Killow. Trying to get into the elevator before Garmadon catches them, Neuro repeatedly presses the down button. When that doesn't work, Lloyd has Skylor use Shadow and Light to hide them. When Garmadon and Harumi left, they continued their mission.

When the Sons of Garmadon attacked the Garbage Depot, the Resistance fought them. They were eventually taken to Kryptarium Prison.

Neuro was captured by the Sons of Garmadon and was placed inside Kryptarium Prison.

The Resistance regained the confidence they needed to escape the prison after they heard the Marooned Ninja are back. They broke out of their cells and to reach the ninja and help save Ninjago.

Neuro joined his allies in chaining the Colossus along with the ninja and were successful in bringing down the behemoth.

The citizens of Ninjago held a party to celebrate their victory, though, for some reason, Neuro didn't come to celebrate this with the Ninja, rest of the Resistance members, and Ninjago City civilians.

Neuro is a playable character in LEGO Ninjago: Shadow of Ronin. He can be purchased for 250,000 studs after destroying five golden statues in the Ninjago hub. He uses melee attacks and possesses no special abilities.

In the Tournament App (non-canon)

Neuro is a boss and a playable character in LEGO Ninjago: Tournament purchased for 1,000,000 studs. His special move is Overload.

Neuro has white and black hair. He also has a goatee, and black eyebrows similar to Kai's. Neuro wears a gray and tan robe-like attire with a leather collar and belt.

In Season 9 Neuro’s hair has thinned out, similar to Master Chen's hair in the past.

Neuro Minifigure
Add a photo to this gallery

Neuro preparing to battle Bolobo in the Tournament

Neuro's introduction in Season 9: Hunted (notice the black middle part in his hair is missing)

Neuro and the Resistance members sneaking in Borg Tower.

Neuro helping in bringing down the Colossus.

Neuro with the other Elemental Masters in a poster for Season 4. 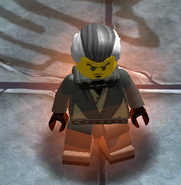 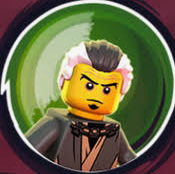 Retrieved from "https://ninjago.fandom.com/wiki/Neuro?oldid=510073"
Community content is available under CC-BY-SA unless otherwise noted.