Never Trust a Human is the eleventh episode of the eleventh season, and the 109th episode overall of LEGO Ninjago: Masters of Spinjitzu. It aired on July 27, 2019 in the United States. It is paired up with "Under Siege."

A flashback episode tells the story of Young Wu and Young Garmadon meeting Aspheera and teaching her the secrets of Spinjitzu.

Back when Humans and Serpentine were enemies, a young Wu grew tired of going to the lake, so he proposed to Garmadon that they visit the Serpentine. At first, Garmadon rejected the idea, but agrees to come with Wu.

The brothers hid in bushes and marveled at the Serpentine as they continued construction on their pyramids. Before they could leave, they were spotted by the Serpentine and taken captive.

Wu and Garmadon are then escorted to King Mambo the Fifth who tells the brothers that they have violated laws between human and Serpentine. As a result, they are punished by being held in a cell for the night.

Now inside their holding cell, Garmadon and Wu began to argue, but they are interrupted by a young Aspheera who questioned the brothers if they are the Sons of the First Spinjitzu Master. She then promised the brothers of freedom only if they could teach her Spinjitzu. Both brothers agree, and Aspheera freed the brothers and they immediately head home.

Before they could head to their rooms, the First Spinjitzu Master questioned the brothers of their whereabouts since they arrived late at night, and the brothers lie to their father. They then glimpse at their father's work which are the Scrolls of Forbidden Spinjitzu. Unfortunately, the First Spinjitzu Master told his sons that the scrolls weren't for them since it possessed too much power.

That night, Wu was troubled on the promised he made to Aspheera knowing his brother Garmadon wouldn't uphold his end of the bargain, so the next morning, Wu went off to find Aspheera and made her promise that she would never use spinjitzu for evil. She agrees and they began to train.

In the upcoming weeks, Aspheera mastered the art of spinjitzu, but little did Wu know that he was being spied by Garmadon. So when Wu arrived home, he was criticized by Garmadon for teaching her spinjitzu and believed that a snake should not be trusted. This prompted another fight between the brothers and Wu getting hurt. Ever since that moment, the brothers decided to isolate and not talk to each other.

A few weeks later, Wu noticed people who were matching away from their homes and questioned one of the villagers. He tells Wu that King Mambo has been overthrown by a Serpentine who knows spinjitzu, and she plans to expand her empire. After hearing the news, Wu told Garmadon and both promised to put an end to Aspheera's reign. In order to overthrow Aspheera, it required stealing the Scrolls of Forbidden Spinjitzu despite the First Spinjitzu Master prohibiting the use of the scroll.

The brothers, while still daybreak, head to the pyramids where Aspheera performs spinjitzu among the Serpentine to defeat Mambo the Fifth in order to signify a change in power.

At night, the brothers make their move and head to the throne room where Aspheera is located. With guards surrounding them, Garmadon fought the guards while Wu fought Aspheera. With the Scroll of Forbidden Spinjitzu, Wu successfully defeats Aspheera who is angry she wasn't taught spinjitzu that Wu performed.

While Wu was walking by Aspheera's cell, she demanded that she were to be released just as she did to Wu and Garmadon, but Wu declined her request. This caused Aspheera to be filled with anger and dubbing Wu a "Treacherous Deceiver."

In the end, Mambo the Fifth was restored as king and the peace between Man and Serpentine was kept. Meanwhile, Aspheera would be placed in a magical tomb that would hold her until her sins are forgotten. 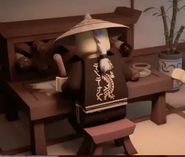 Start a Discussion Discussions about Never Trust a Human