You may be looking for the Staff of the First Spinjitzu Master.

Intact
The Nin-Jô is a weapon that comes in various 2011 and 2012 sets and spinners. It is a simple brown staff, with a slightly enlarged section near one end being its only distinguishing feature. It is commonly presented as Master Wu's weapon of choice, but it was also used by the Kendo Ninja in the 2012 sets and used by Master Garmadon in Rebooted, as it represents a traditional Kendo training sword.

The Nin-Jô has a golden counterpart called the Staff of Dragons. A black variant also exists, mainly wielded by Techno Wu. The Fuchsia Ninja also uses this weapon in The LEGO Ninjago Movie Videogame.

When you don't have the words, use a Really Big stick to get your point across. It may not be pretty, but - POW - it works. It's very effective, 'cause no one likes to get hit with a Really Big Stick.

Some weapons just never go out of style. Sensei Wu swears by the ancient Nin-jô. Simple and classic, this staff knows no limits in the hands of the trained Ninja.

CGI Wu with a Nin-Jô 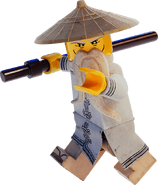 Master Garmadon wielding a Nin-Jô in the Tournament of Elements Monastery Mural.
Add a photo to this gallery

Sensei Garmadon hitting Jay on the head with a Nin-Jô

Master Garmadon wielding a Nin-Jô in the Season 10 opening.

Nin-Jô pictured on the Monastery mural.

Add a photo to this gallery
Retrieved from "https://ninjago.fandom.com/wiki/Nin-Jô?oldid=547445"
Community content is available under CC-BY-SA unless otherwise noted.