Not to be confused with the Nindroid Army as a whole.

Active
Nindroid Warriors are advanced combat warrior robots, or androids designed by P.I.X.A.L. under the Digital Overlord's influence and form the heart of the evil Nindroid Army.

Based on Zane's blueprints, Nindroid Warriors are said to be superior to the ninja of Ice in every way; being stronger, faster, and capable of cloaking themselves. However, the Nindroids rely on an outside source of power unlike Zane, whose power source comes from within.

The Nindroid Warriors were created in the factory of Borg Tower under the supervision of P.I.X.A.L. who had obtained blueprints for them when she had scanned Zane earlier.

Nindroid Warriors were dispersed throughout Ninjago to protect the Overlord's vital assets (such as the Storm Farms), establish security perimeters, and locate the Techno Blades. A group of them led by P.I.X.A.L. were sent to Garmadon's monastery, where they faced off against the ninja for the first time. However, they were all deactivated when the ninja destroyed the Power station.

In order to obtain the Golden Ninja, the Overlord dispatched two squads of Nindroids. The first was led by General Cryptor, which attacked the ninja and Serpentine in the tomb of the Stone Army. They were, however, just a distraction as the second squad (lead by Techno Wu) was sent to Hiroshi's Labyrinth to capture Lloyd.

More Nindroid Warriors (presumably reactivated by Pythor) attacked Borg Tower to stop the ninja from interfering with the Digital Overlord.

Several Nindroid Warriors accompanied General Cryptor and Min-Droid on the mission to retrieve the Golden Weapons from the Arcturus comet.

A number of Nindroid Warriors were seen at Borg Industries, lined up to welcome the reborn Overlord and prepared to conquer New Ninjago City. Later on, they pursued the ninja and tried to break the forcefield around the Temple of Fortitude. However, Nya used General Cryptor's Destructoid to blast them.

Some of the remaining Nindroids were converted into security droids to protect the decoy Golden Armor in Hiroshi's Labyrinth.

Requiring money to sustain their systems, several Nindroids resorted to committing petty crimes after they were rejected from regular jobs because of their past affiliation with the Overlord. These Nindroids were caught by the Ninjago City Police and placed in Kryptarium Prison.[1]

When No-Eyed Pete opened all the cells, the captive Nindroid Warriors faced off against Zane, but thanks to the original's upgrade, they were no match for the Titanium Ninja.

The Nindroids returned with their white clothing when Nadakhan trespassed the Hiroshi's Labyrinth security system and sounded the alarm. They and their new general were assembled to listen to Cyrus's orders that the realm Crystal has been compromised, and wants them to search for it. Without the Nindroids knowing so, Nadakhan pretended to be Cyrus Borg and tricked them that the Realm Crystal wasn't compromised. Nadakhan then teleported out and escaped with it.

Two Nindroids were still imprisoned in Kryptarium when the ninja were sent there for crimes that they were framed for. Both were released into the courtyard by the Mechanic, and they cheered him on as he demanded the ninja to hand over Zane for his spare parts. The Nindroids were present when a fight broke out in the cafeteria, and they both joined in.

Some Nindroids, equipped with jetpacks, assisted General Cryptor to attack Zane. They were defeated when he destroyed their jetpacks, sending them back to the Departed Realm.

Prior to March of the Oni

Some of the Nindroid Warriors were locked away in the Borg Tower vaults.

The Nindroid Warriors in the the vaults stood motionlessly contained in a glass case down the hall from the Realm Crystal.

Nindroids are high-tech fighting machines manufactured based upon the blueprints of Zane.

But they are the next generation of artificial warriors, stronger, faster, and more agile than Zane has ever been. In addition, they have cloaking abilities that let them turn invisible. This mechanical army serves the Digital Overlord. Where Zane is able to feel friendship and more, Nindroids have no emotions. They are completely cold and totally focused on accomplishing their mission. Nindroids cannot be reasoned with or frightened off and they will only do strategic retreats if it seems that defeat is inevitable.[2]

Day of the Departed minifiure 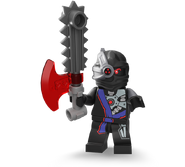 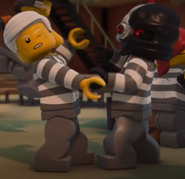 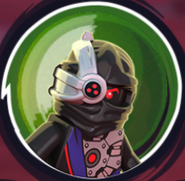