View source
watch 01:25
Jurassic World: Dominion Dominates Fandom Wikis - The Loop
Do you like this video?
Play Sound
“I vowed that one day, I would become better, stronger, and more powerful than the First Spinjitzu Master. I would return to him and show him that he should have believed in me.”
— Nineko, The Curse of the Cat-Eye Jewel

Unknown
Nineko is a ninja and a sorceress that was once trained by the First Spinjitzu Master. She became an anthropomorphic cat and sought immortality.

At first, Nineko tried to perfect Spinjitzu on her own, but soon learned that the only way that she could be better than the First Spinjitzu Master was by becoming immortal. So she studied Dark Magic and used her new abilities to drain the life out of the crops from Komala's village. But due to the spell backfiring, Nineko instead caused the crops to turn black and die.

Because of Komala's spell, Nineko used dark magic to transform herself into a cat, so she could steal the jewel's powers. After turning into a cat, Nineko created a martial art called Catjitzu and practiced it for 10 years. Nineko was able to persuade other people to get the jewel for her, while at the same time, create monsters to get it, but both groups failed to get it because of the Order of Felis.

The Curse of the Cat-Eye Jewel

At the age of eighteen, Nineko had long black hair with a bangs and wore a distinctive make-up. She wore a simple kimono with a neckline.

After being transformed into a grey cat, Nineko retained her slender human body, but her head completely transformed into a cat's head with large yellow eyes. She wore an earring in her right ear. She also kept her long black hair and mostly wore it in her tail fastened with her mallets. She wore a kimono with depicted paws, and pants with a tail sticking out of it. Sometimes she also wore a ninja-hood on her face and sometimes she also wore an another pale green kimono with a skirt with a pattern of blue fish printed on it.

Nineko was once an orphan and had to steal to make a living. When the First Spinjitzu Master took over, she was happy to have a home, but when her master accused her of stealing his katanas, she realized that he would always consider her a thief, so she left him. Gradually, she became much more bitter and longed to be even more powerful than the First Spinjitzu Master. With the help of Dark Magic, she turned into a cat just to get the Cat-Eye Jewel that would guarantee her what her former master had - immortality. Nineko tried to achieve her goal in various ways, ignoring and hurting other people. She even summoned various monsters to get the Jewel for her, but without success.

Later, she was willing to deceive Wu and Garmadon and use their naivete to steal the Jewel, but she was completely indifferent to them, and all she really cared about was achieving immortality.

A conniving sorceress whose only desire is to become immortal. To achieve her goal, Nineko needs the Cat-Eye Jewel. She believes she can get it with the help of Garmadon and Wu.

On the cover of The Curse of the Cat-Eye Jewel

"You're welcome. I am Nineko." 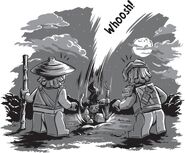 Whoosh! Nineko silently dropped from the tree house and landed between the boys.

"That was the right idea. You just need more control."

"I realized then that he would always see me as the young thief that he had rescued. So I continued training on my own."

"We won't fail you!" Garmadon assured her.
"I hope you won't," Nineko said.

"You are correct. Your brother and I cannot defeat all of you alone. But we are not alone."

"Garmadon, fetch me the jewel!"