Ninjago Wiki
Register
Don't have an account?
Sign In
Advertisement
in: Magazine, Ninjago: Masters of Spinjitzu, Master of the Mountain, 2020
English

View source
“When the end drew near for Lilly, Cole made a promise and that’s how Cole became the Master of Earth, just like his mother before him.”
— Misako talking about Lilly

Ninja Legend! is the 68th issue of the Ninjago Magazine. Kai appears on the cover, and the comic, written by Jan Dinter, is called Mother Earth. 892068 Richie (Richie with a katana and floating surfboard) is included. It was released in October 2020.

P.I.X.A.L. and Misako are working on a new ship while the ninja and Wu are away at Shintaro Mountain. P.I.X.A.L. decides to take a break to play some video games. Misako comes in and scolds her for wasting time when they have so much equipment to bring onboard. P.I.X.A.L. returns to work and goes to move Wu’s teapot into the ship. In doing so, she knocks a stack of photos onto the floor. As she picks them up, she notices a young Wu with someone she doesn’t recognize. She shows the photo to Misako, who tells her it is Lilly.

After P.I.X.A.L. expresses confusion as to who Lilly is, Misako tells P.I.X.A.L. that she was a ninja who trained with Wu many years ago. She described Lilly as one of Wu’s most promising students and grew in power tremendously when she reached her True Potential. She used her Earth powers to protect the citizens of Ninjago City. She later acquired two blades representing light and darkness, the Blades of Deliverance.

Misako goes on to describe some of Lilly’s missions and adventures. One of these was to descend into the Underworld to spy on Garmadon. She infiltrates his Dark Fortress and eavesdrops on a conversation between Garmadon and Samukai, relishing in the capturing of Dr. Julien for the purpose of designing new vehicles. Shocked, Lilly escapes to tell Wu the bad news. Another mission was answering a distress call from Jamanakai Village. She is ambushed by some Venomari. They prepare to spit their venom into her eyes, but she covers her eyes with a blindfold. Despite being voluntarily blinded, she defeats the snakes with ease.

Misako then tells P.I.X.A.L. that her greatest adventure came later, when two tribes came to her from a far off kingdom for help with defeating a dragon threatening their lives. Lilly leaves the Monastery of Spinjitzu to set off towards Shintaro to face off against the beast. When she returned to the Monastery, she didn’t bring the Blades of Deliverance back. Misako assumes that the blades are still in the caves of Shintaro.

Later on, Misako tells of Lilly retiring and giving birth to Cole with Lou. She said that Lilly recognized young Cole’s destiny to be a great warrior and that he’d inherited her power. In her final moments, she made Cole promise that he would always stand up to those that are cruel and unjust. Of which, Misako recognizes, Cole has more than lived up to. 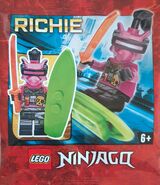