“
He's in his car! He's heading toward Kryptarium Prison!
— Cole to the ninja and P.I.X.A.L. in "True Potential"
„

The Mask of Deception
70641 Ninja Nightcrawler

Unknown
The Ninja Nightcrawler is a sports car used by Lloyd. It is heavily armed and extremely fast.

Lloyd used the Ninja Nightcrawler after Mr. E escaped Borg Tower with the Oni Mask of Vengeance. After a quick battle, he called P.I.X.A.L. to send the car so he could go after Mr. E on his Oni Bike. Lloyd raced through the streets of Ninjago City attempting to catch the biker until Mr. E used the Oni Bike to jump over the Nightcrawler. Mr. E then kept over the side into a river, landing on a boat and escaping.

After seeing that Lord Garmadon had been resurrected, Lloyd locked the other ninja in a room and used the Ninja Nightcrawler to head to Kryptarium Prison. On his way there, his friends tried to get him back, but Lloyd angrily smashed the camera. When Jay said he wouldn't get rid of them that easily, he hit it harder. He parked up and went inside the prison. Since he crawled away alone, it's unknown what the S.O.G did with the car. 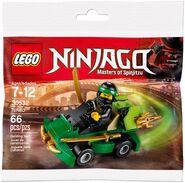 Lloyd with the ninja nigtcrawler
Community content is available under CC-BY-SA unless otherwise noted.