Ninja Roll is the 4th episode in the fourth season and the 38th overall episode of LEGO Ninjago: Masters of Spinjitzu.

Kai is running around outside the temples, appearing to be lost. Hearing Chen's voice announcing the next fight, he turns and heads towards it. Inside, Skylor is about to fight Jacob Pevsner, the Master of Sound and they begin to smash vases in order to find a Jadeblade. Garmadon is surprised at how much stronger Jacob is since the last time he saw him, while Skylor tries to throw him off her trail. Kai soon arrives and makes his way to his seat, stepping on everyone's toes in the process. Jay is concerned that the other competitors will gun for them so long as they're a team, though Lloyd says they are a team, even with Cole and Zane missing.

Kai soon realizes Skylor's fighting, just as she sets Jacob's sitar on fire, while Jay fills Garmadon in on his crush on her until they found out they might be related. Garmadon explains that Skylor's element isn't Fire—it's Amber, meaning she can absorb another element, which immediately brings Kai's feelings back. Jacob soon has the advantage using blow darts, though Skylor tricks him into firing into paper, where the sound of the air throws him off long enough for her to break the last vase and take the Jadeblade. After Jacob is eliminated, Chen announces he initially wanted to give everyone jewels for their work in the Tournament, but, due to Jay's fight with Cole yesterday, he rejects the idea and takes away everyone's private suites, forcing them to sleep in the chow house. As Jay and Kai berate each other while the other competitors leave, Garmadon warns them that if they don't make friends with the others, they'll try to eliminate them by any means necessary.

Meanwhile, Cole is in a cell, having had his powers taken away, and attempts to break out using his super strength, only to discover that it's gone too. Clouse then enters, saying that Cole will be put to work in Chen's Noodle Factory, which he's initially giddy about until he hears he can't eat any of the food. He is stationed at the same conveyor belt as Karlof and Jacob, the former showing him how to do his job (after he accidentally dumps a bag of flour on a worker) while the latter declares the first chance he gets, he's escaping.

At Chen's Noodle House, Nya is spying on Eyezor, who's collecting supplies, while reporting to Master Wu that following him and the delivery trucks will lead her to the Ninja. After ceasing communication, she disguises the D.B. Express as one of the trucks in order to follow the others. Inside the Noodle House, Dareth is complaining that his favorite dish, the Puffy Potsticker, has been discontinued, to which he begins to follow Nya on foot for an explanation, due to the disguise.

While the competitors rest, the remaining three Ninja discuss a plan, but quickly jump back to their beds just as Clouse arrives. He orders Master Chen’s servants to add roller-skates to everyone’s feet, making the contestants curious, while Jay is excited to skate, stating that he's skating champion. Clouse only says Lloyd will fight Chamille, Master of Form before leaving. Lloyd is confused as to who Chamille is, to which Kai seemingly explains how she can disguise herself to find another's weaknesses. Lloyd points out his only weakness is his aching back (as a result of the mattress he slept on), but as Kai skates away, he appears on the other side, struggling to balance on his skates. Lloyd realizes that Chamille, disguised as Kai, tricked him into pointing out his only weakness to her.

Back in the factory, Jacob makes his move to escape. As Cole and Karlof watch, things go well, but as Jacob reaches the door, Clouse enters and catches him. Jacob berates the others for not warning him (Karlof preventing Cole from doing so), while Clouse orders for the Master of Sound to feed his snake. Cole is horrified upon hearing this, but Karlof, not wanting to get in trouble, dumps a bag of flour on him in order to get him to go back to work.

The competitors enter a roller rink where Chen announces the next event: a Thunderblade race. He tosses Lloyd and Chamille each a Jadeblade, and says that whoever crosses the finish line with their Jadeblades and has more points before time runs out, wins. Turner notes that everyone's wearing skates, and asks why the others are even there, to which Chen stated they're allowed to choose teams to affect the outcome. Almost everyone sides with Chamille, leaving the Ninja at a huge disadvantage. After the competitors are set in place, the race starts with Lloyd and Chamille getting a headstart while the others follow soon after. Skylor asks Kai what's left from stopping him from winning the Tournament if Lloyd was out, to which he says he doesn't think of it before she knocks him down. By now, Lloyd and Chamille have each gained a point and have caught up to the others, who stop Lloyd from passing. Jay decides to make an opening by shocking Neuro, which works and stops everyone else: however, the plan fails as Kai accidentally knocks into Lloyd, causing him to fall behind by one point.

On the pier in New Ninjago City, the trucks are boarding Chen's Ferry. Nya is trying to find out why, when Dareth knocks on the passenger window, where upon seeing her, he assumes she is a delivery girl. She then brings him in and fills in everything that's happened regarding the Ninja. He then offers to help, which she denies, though she doesn't have a choice as they are next to board.

Back at the race, Chamille is still ahead of Lloyd by one point, with the score now 4-3. Chen expresses his joy of Thunderblade, and states he holds a record of 100, though Garmadon doesn't believe it: Clouse then points out the Master was used to lying, stating it worked on Misako. Chen starts using his control panel and activates a ramp to stop Lloyd, though it doesn't stop him. Jay then whips him only to discover it's Chamille in disguise. She then orders Shade to hit Lloyd's back, succeeding and making him drop his Jadeblade. Paleman then takes it, only for Jay to take it back and knock him off the track. Everyone does whatever they can to stop the Ninja (with only Kai taking the hits), with Chen even releasing a buggy to extend Chamille's lead.

Lloyd is soon ambushed by Paleman, Shade and even Neuro, and when Jay tries to help, Turner accelerates him around the track and into the Green Ninja, though it helps his back. Skylor comes up to Kai, saying he's convincing and Lloyd will soon be eliminated.

With the score now 8-5, Kai decides to help, despite not keeping balanced, and uses his powers to hit Chamille and making her drop her Blade, allowing Jay to take it. Skylor attempts to berate Kai for what he did, though he snaps and says that as Ninja they stick together, causing Skylor regret trusting him. Jay approaches him and informs him of Lloyd's progress, though Kai now realizes Garmadon was right about distrusting the others. He then states if everyone knew about Chen's true intentions, they'd help: Chamille then takes back her Jadeblade.

Kai latches onto Skylor, explaining what he meant and revealing the real nature of the Tournament: upon mentioning the spell, Paleman becomes interested. Jay and Lloyd do the same to Turner, who doubts it but Neuro confirms it after he stops Tox from attacking them. Jay is surprised the Master of Mind had chosen that moment to help, to which he explains he wanted to be on the winning team. Chamille attacks Kai and he lands near the buggy, allowing him and Skylor to take it. They drive up to Lloyd and let him take it, where it transforms into his color. While the others keep Shade and Tox from attacking the Green Ninja, Chen goes all out on his traps, all of which fail. The score becomes tied and Lloyd tries to convince Chamille to join them, though she pulls him out of the buggy, leaving them to go head on in a sword fight.

Chen becomes worried of Lloyd winning and orders Clouse to use his Magic, but he's stopped by Garmadon. The scorekeeper then tries to rig Lloyd's score, but Skylor, having obtained Gravis' Gravity, has him float helplessly. The two racers soon cross the finish line just as time runs out, with the final score being 13 each. However, Chamille is revealed to have dropped her Jadeblade, making Lloyd the winner.

Skylor then drops the score keeper, jokingly changing Lloyd's score to 106, and having Garmadon remark that his son broke Chen's record. Chen, however refuses to have the event count, claiming Lloyd cheated and is disqualified, though Turner stands up for the Green Ninja and states Chen cheated, where the Master claims what his rules says, goes. Paleman, Kai, and Jay protest if Lloyd's out, then so are they whereas Skylor states if everyone is eliminated, there is no Tournament. With that along with Clouse confirming it, Chen is forced to comply and eliminates Chamille. As everyone cheers for Lloyd, Skylor warns Kai that because of this, Chen will do anything to eliminate the Ninja. Kai then states that as long as everyone sticks together, there's always hope.

In the dungeons, the workers are being taken to another part of the factory when Cole hears Zane's voice, and approaches his cell. The guard asks why the others stopped, though Karlof covers for Cole by saying he's tying his shoe. Upon getting closer, Cole sees Zane and is amazed at his new Titanium form. The Earth Ninja then promises to get his friend out. By this point, the guard gets suspicious and heads to the back, only to find Cole there. Cole then tells Karlof that while Chen can separate the Ninja, they'll always find a way to bring themselves back together. As he says this, the ferry carrying Nya and Dareth approaches on the island. 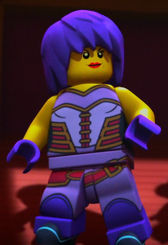 Add a photo to this gallery
Retrieved from "https://ninjago.fandom.com/wiki/Ninja_Roll?oldid=364631"
Community content is available under CC-BY-SA unless otherwise noted.