Laura Reich
Asa Tait
J. Rick Castañeda
Ninjago: Decoded is a mini-series that was released on November 27 of 2017, between Season 7 and Season 8. It consists of ten parts that are about eleven minutes long. It uses recycled scenes from Season 7 with changed voice acting, as well as clips from other previous episodes.

This mini-series was done to recap the events of the series in order to prepare fans and newcomers (such as The LEGO Ninjago Movie fans) for Season 8. It is a recapitulation of the series from the pilot episodes to Season 7.

The official playlist of the episodes can be viewed here.

Zane glances over the events of all the seasons, with added comments from Nya. Zane now remembers the events of Skybound, thanks to Nya tinkering with his memory.

Something has happened to Zane while his memory was being backed up into the Samurai X mainframe. Nya and Jay are trying to fix whatever is wrong with Zane. Jay needs to remember all the vehicles in order to restore Zane's memory; once solved, the puzzle showed the text "D PO LWB" in the Ninjago language.

Nya and Jay continue helping Zane—this time with the help of Cole, who's "possessing" Zane. This time around Cole needs to guess which location Zane is thinking of. They start off with Temple of Airjitzu, with which Cole is very familiar with. Jay decides that the strange structure in Zane's memory is called "Ninjigma." Once they figure out which locations it is referring to, they find out that Zane is actually being hacked.

Kai joins in and suggests they need to figure out who's hacking Zane and behind the "Ninjigma." They didn't manage to do it in this episode, and someone starts attacking the Samurai X Cave. Cole leaves Zane's mainframe to go fight whoever it is. Nya seems to remember the time when she was under the influence of Dark Matter. In addition, Jay and Nya reflect on Nadakhan and leave the others confused until Zane gives a short narration.

The rest of the crew continue trying to figure out who's behind the attack on Zane. The key to solving this mystery seems to be the technology of Ninjago. The crew starts reminiscing about it. They are successful in solving the puzzle but the progress of the hacker is not slowed down. They find out that the hacker is not trying to destroy Zane, but rather control him.

Nya manages to slow down the hacker by using her technical expertise. The next puzzle is actually a riddle about Elemental Masters in Ninjargon. The ninja need to solve this puzzle quickly because the cave is running out of power. With Kai's temper, they eventually came up with the correct answer of Fire.

Power is restored by Nya, while Cole reports that the outside enemy has destroyed one of the generators. They try to figure out who’s attacking them. Cole is able to stop whatever is attacking them without them actually realizing who it is. Zane is taken over by the hacker.

Zane attacks Nya but regains his senses in the last moment. With only enough power left to get everybody out or put Cole back in, the crew decides to stick with Zane to the bitter end. Somehow the crew start thinking about Garmadon's youth in order to solve the next puzzle. Zane’s memory is fading and it’s up to the rest of the ninja to fill in the blanks.

The next puzzle is a labyrinth where the path is a message in Ninjargon and the goal is to reach the Green Ninja in the middle. The ninja open up paths in it by remembering how they got their True Potential. Nya translates her emotions into code. Lloyd joins everybody to break the last wall. The ninja solve the final puzzle as well and by doing so, release the Overlord.

The "Ninjigma" stored the memory of Zane battling the Overlord and dying in the process. Nya reveals that the Overlord is not actually the Overlord, but a fragment of his code and a virus at that. The ninja battle the virus by thinking about all the other enemies they've defeated and weapons they've used. However, this strategy is not working and the virus seems to have the upper hand. The team realized it's not their weapons that made them strong, but rather their friendship. Using this, they are able to defeat the virus, allowing Zane to reboot himself. 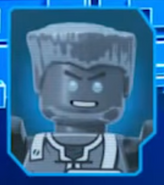 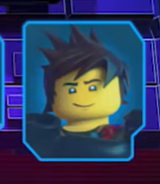