TBA
Ninjago: Reimagined is a series of shorts to celebrate the 10th anniversary of Ninjago.

It’s 2021! The year LEGO NINJAGO celebrates 10 years of stories and play. A legacy of memorable ninja adventures. Friendship. Dragons. Epic Battles. And everything else you know and love! To celebrate this wonderful action-packed world, we’re releasing a series of original short films. Each one will tell an exciting new story in ways never seen before! This is NINJAGO Reimagined. Five short films featuring your favorite NINJAGO characters: Kai, Cole, Lloyd, Zane, Jay, Nya, and of course the wise Master Wu. Are you excited yet? Get ready for a new adventure![1] 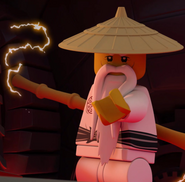 Old Wu, in one of the short films.

Wu and Garmadon as children

Wu fighting with the Time Twins

Retrieved from "https://ninjago.fandom.com/wiki/Ninjago:_Reimagined?oldid=648609"
Community content is available under CC-BY-SA unless otherwise noted.