Ninjago: The Realm of Shadows is a play featured at LEGOLAND in Malaysia. It takes place after Season 6 but before the events of The Dark Island Trilogy and "Day of the Departed." It focuses on Clouse, who has survived the destruction of the Cursed Realm that resulted in the deaths of nearly all of its prisoners. With his allies gone, Clouse schemes to end Ninjago through his own sinister means, with the Ninja embarking on a journey to stop his plans.

Kai and Nya are seen training when a teapot of Traveler’s Tea appears as well as a mysterious egg. Kai then drops the egg and it hatches into Bandit. Then Clouse is seen in a shadowy temple and has somehow escaped the Cursed Realm, and is planning to plunge Ninjago into darkness by using Bandit, a young YinYang Dragon to complete a spell. Clouse tasked his Shadow Minions to capture Bandit. Kai and Nya are seen following Bandit when the Destiny’s Bounty appears and they board it. Lloyd, Cole, Zane, and Jay then appear. Zane tells them it is a YinYang Dragon.

The Ninja take out their Elemental Blades as the Shadow Minions start attacking. The Shadow Minions take Bandit away, so Nya suggests that they jump off the bounty. Kai asked someone from the audience if they have a parachute underneath their sun hat, then blames that person for making them jump off the bounty, then Kai and Nya jump off of the ship and fall into the Toxic Bogs. They find a trail of Bandit’s shed scales and follow it, also deducing it is Clouse behind all of it. They find the trail ends at the shadowy temple, and press down on three pressure locks and it opens the door, releasing a flood of water which Nya directs away from them. They hear the ceremony starting and they run into the temple. As Clouse starts the ceremony, they try to free Bandit but he refuses because he was turning into a Shadow Dragon. They fight off some Shadow Minions and encourage Bandit enough that he turns into a Light Dragon. The temple turns to crystal and Clouse runs off. Bandit starts flying around and the rest of the Ninja appear. They find out the Traveler’s Tea was destroyed and are stranded there. They then realize if they all combine their Spinjitzu, they will return home. They combine their Spinjitzu and then return home as planned. 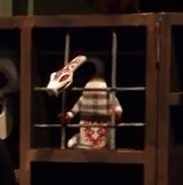 Start a Discussion Discussions about Ninjago: The Realm of Shadows