Humans
Animals
Ninjago, also referred to as Ninjago Island,[1] is an island that is inhabited by humans and animals. Its capital is Ninjago City. 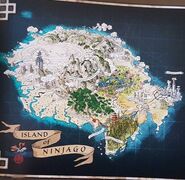 A map of Ninjago.

The map of Ninjago on the newscast.
Add a photo to this gallery

Retrieved from "https://ninjago.fandom.com/wiki/Ninjago_(The_LEGO_Ninjago_Movie)?oldid=607655"
Community content is available under CC-BY-SA unless otherwise noted.