Ninjago Wiki
Register
Don't have an account?
Sign In
Advertisement
in: The LEGO Ninjago Movie, 2017, Locations,
and 3 more
English

Citizens of Ninjago
Ninjago City is the capital city of Ninjago, and is found near its southeastern coast.

Ninjago is a city that is frequently attacked by the evil Lord Garmadon, who is the father of Lloyd Garmadon and husband of Koko. The city despises Lloyd for this relationship, which puts Lloyd in emotional stress. They do not know that Lloyd is part of the Secret Ninja Force, consisting of Nya, Zane, Jay, Cole, Kai and their master, Wu, who always stop Garmadon from taking over the city. On Lloyd's birthday Garmadon attacks the city once again, only to be defeated. He escapes and throws many of his generals out the volcano for failing to help him. He then beings to form a big attack to conquer Ninjago, and decides to build a gigantic mech that is immune to weapons.

Meanwhile, Lloyd and his friends see the return of Master Wu, back from his long trip. Master Wu tells them they aren't real ninjas if they use only mechs and machines. He discusses with the Ninja of their respective powers: Nya's power over water, Kai's power of fire, Jay's power over lightning, Cole's power over earth, and Zane's power over ice. Wu then states that Lloyd is the green element, only to be confusing Loyd with that topic. Master Wu tells Lloyd he must not be angry at Garmadon; he must use his mind to fight. Wu mentions an Ultimate Weapon, giving Lloyd an idea to finally defeat Garmadon once and for all, despite being forbidden to use it. The next day Garmadon attacks the city with his giant mech. He successfully defeats Lloyd and his own mech. As Garmadon declares his rule over Ninjago, Lloyd returns with the Ultimate Weapon. He fires it, revealing it to be a laser that attracts a real-life cat named Meowthra. Meowthra starts destroying the city, while trying to get the laser. Garmadon points the laser to make the cat destroy the other mechs, before Lloyd breaks it. As Garmadon celebrates his victory, Lloyd reveals that he is the green ninja, and tells Garmadon that he wishes he wasn't his father, leaving Garmadon speechless.

Lloyd meets up with his friends and Master Wu, who are all upset with him for using the weapon. Wu tells them they must use an Ultimate Ultimate Weapon to stop Meowthra from destroying the city, which they would reach by crossing the Jungle of Lost Souls, the Bridge of Fallen Mentors, the Canyon of General Unhappiness, and the Temple of Fragile Foundations. After finishing their journey finally to the Temple of Fragile Foundations, they retrieved the Ultimate Ultimate Weapon only to be betrayed by Garmadon. Garmadon arrives and tries to control Meowthra with the weapons but Meowthra eats Garmadon instead. Lloyd and the crew arrive and begin fighting Garmadon's army. As Lloyd approaches Meowthra, he reveals to everyone that he is the green ninja, and realizes that green means life, which brings everything together. He comforts Meowthra, and tells Garmadon he forgives him, and that he's sorry. Garmadon cries tears of fire, which causes Meowthra to spit him out. After reconciling, Garmadon moves in with Lloyd and Koko, Meowthra becomes the mascot of Ninjago, and Lloyd is hailed as a hero.

In its set form

In a "spot the ninja" online activity 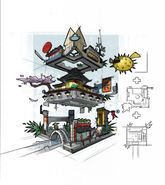