View source
watch 01:25
Jurassic World: Dominion Dominates Fandom Wikis - The Loop
Do you like this video?
Play Sound
“If you see them, do not approach. Call local law enforcement so that we can apprehend.”
— The Police Commissioner, "Infamous"

Before Legacy of the Green Ninja

A police car is seen arriving to the Ninjago City Bank after Acidicus, Fangtom and Skalidor break into the vault underground.

After Soto and his pirates were defeated by Nya, a Police Officer arrested them and thank the ninja.

When Skales was freed from prison by the Serpentine Generals, the Ninjago City Police chased them. However, when the police crossed paths with the participants of Ninjaball Run, they forget about Skales and joined the race.

After the ninja, regressed to children, were accused of stealing a sarcophagus from the Ninjago Museum of History, the police officers arrested them and brought them to the museum's curator.

A guard was on duty at the Ninjago City Aquarium. When he spotted Pythor disappearing, he sounded the alarm using his voice.

When Soto participated in a number of Ninjago races and resorted to shooting the tires of his opponents' vehicles, the police were alerted and soon arrested the pirate captain. At other points in time, the police arrested various Nindroid Warriors who had resorted to committing petty crimes to gain money to maintain themselves, as well as Kruncha, who had been bribing his opponents to let him win in the Slither Pit at Yang Tavern.[1]

The Night Watchman was guarding the Ninjago Museum of History before he is possessed by Morro.

After getting a call from the museum, Lloyd headed there where the possessed Night Watchman takes Lloyd to a room. A short skirmish occurred and the Night Watchman is freed in exchange for Lloyd's body.

Towards the entrance of the museum, Noonan and O'Doyle were putting up crime scene tape. They were met by a wind coming from inside the building and fled in terror.

A police officer was seen with the Night Watchman when Dareth was driving the Prototype X-1.

When Nadakhan committed crimes to frame the ninja, the police track them down to Stiix, and later bring down the Destiny's Bounty and arrest Misako.

Upon learning Kai had updated his status, they track down his communication device to an alleyway, only to find out he put it on a rat.

In order to locate Misfortune's Keep, Jay and Nya snuck into the Police Station to use their computer. At the same time, the Police Commissioner was present organizing a search for the ninja.

The Commissioner, his deputies, and Ronin pick up Lloyd, Cole, and Nya from Tiger Widow Island after finding out they took Cliff Gordon's boat and told them they had been cleared of their crimes.

The Commissioner told Dareth that the ninja have his men at their disposal, but the Brown Ninja sends them away. However, they stick around to help construct a Raid Zeppelin. The Ninjago Police later help Jay and Nya when they reach Ninjago.

The Commissioner and his men try to hold Nadakhan off while Jay and Nya flee through a secret hatch. When Nadakhan caught up to them, the Commissioner ate their map to prevent him from finding them before he and his deputies were taken by him. When both Tommy and Simon were to walk the plank, Nadakhan learned of the Tiger Widow Venom from Tommy, making the Commissioner hate Tommy more before they abandon ship, near a shark, causing him to twitch his eye again.

As Jay was bringing together a team to stop Nadakhan, the Commissioner was in the process of arresting Ronin when he beckoned them to come. During the chase of Sqiffy and Bucko, the Commissioner was able to arrest Sqiffy when Soto threw him off his vehicle and watched as the piece of Ninjago the others got on started to rise up into the sky.

Two officers bring in a judge, who later attempted to escape, only to end up slipping on Zane's ice.

The ninja and P.I.X.A.L. request the police's assistance when Harumi and the Sons of Garmadon kidnapped Lloyd and were planning to resurrect Garmadon. They provide the distraction for the ninja to infiltrate the Temple of Resurrection and later arrest the members after the ninja were able to stop the ceremony.

The resurrected Garmadon attacks the station to break Harumi out.

After the Sons of Garmadon took over Ninjago, they replace the police officers as well.

The police join The Resistance in order to break out of Kryptarium Prison and defeat Colossus. After Lloyd defeats his father, the police arrest the Sons of Garmadon and Garmadon himself.

Jimmy informed the Police Commissioner about multiple calls of a dark cloud taking over Ninjago City. When his crew assessed the situation, they see a towering cloud approaching them so they decided to flee. However, they encountered a dead end. Luckily, the ninja arrived in the Destiny's Bounty and the police officers were saved.

Trying to find crime, the ninja headed to the Police Commissioner, but didn't really do anything despite getting alerts from Jimmy.

Facing certain doom, the ninja come and rescue the Commissioner and defeat the Elemental Cobras.

The Police Commissioner is one of the people who hid from The Preeminent.

The Ninjago Police arrived to arrest The Mechanic.

The Commissioner interrupts the ninja's interrogation of The Mechanic to inform them that Prime Empire had begun appearing on arcade machines all over the city. He then, gleefully, escorted The Mechanic to his prison cell.

Sometime between the attack by Unagami and the Battle for Shintaro Mountain, Ronin was hired by the police to assist in the hunt for the escaped Kryptarium inmates, capturing Fugi-Dove in the progress.

While the Maaray Guards were attacking Ninjago City, Gripe told the Ninjago City Police to surrender and perish. But when he did, Jimmy and another police officer look at each other in confusion.

While on harbor patrol, the Coast Guard went fishing, but ended up sleeping. However, he woke up when his fishing rod caught something, which was Glutinous. When Glutinous said that he needed to speak to the ninja, the Coast Guard took him to the Ninjago City Police Station so the ninja could meet him there. The Police Commissioner and Jimmy later learned that Kalmaar awoken Wojira and is on his way to Ninjago City, the Commissioner ordered Jimmy to have all the citizens evacuate for the Great Flood. 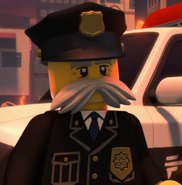 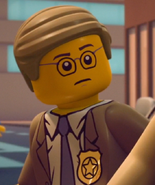 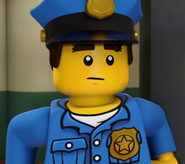 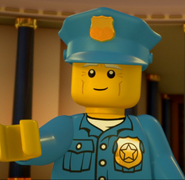 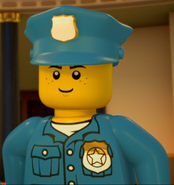 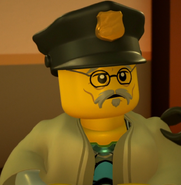 A policeman in Season 2 and 3.

A policeman in Season 6 until Season 10.

A policeman in Season 11 and onwards. 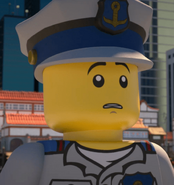 A police car in Season 2 and Season 6. 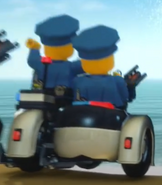 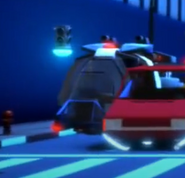 A Police car in Season 8 and Season 9.

Police cars in Season 11 and onward.