Nya's Bike is a high-tech motorcycle utilized by Nya. Nya used the bike to try and escape from Ronin, who was attempting to capture her, and she ultimately managed to do so. Her brother also has a similar vehicle.

At some point, the vehicle was built along with Kai's bike. It is unknown who built it, although it is likely that Nya is its creator.

After the Battle of Stiix, the Ninja were falsely accused of committing crimes by Nadakhan, and the Police Commissioner made it a top priority to have them captured. The Ninja split up and went into hiding—Lloyd and Zane went to Domu and Jay and Cole went to Mega Monster Amusement Park. Kai and Nya used the bikes to head away from the city. In the meantime, the Commissioner hired Ronin to hunt down and capture the Ninja.

Ronin apprehended all of the Ninja except Kai and Nya, who he found at the Corridor of Elders. Using their bikes, Kai and Nya tried making their escape through the vast canyons as Ronin pursued them using R.E.X. Eventually, Ronin managed to capture both Kai and Nya, and their bikes were either abandoned or taken away by the police.

After Jay made his final wish, recent events were undone and the Ninja were never wanted by the police. As such, Kai and Nya never used the bikes to make their escape.

Nya used her bike to visit her Samurai X Cave. After Kai called her to the Noodle House, they both used their bikes to reunite with the Ninja in the Vermillion Dome of Doom. 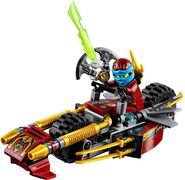 Add a photo to this gallery
Retrieved from "https://ninjago.fandom.com/wiki/Nya%27s_Bike?oldid=514023"
Community content is available under CC-BY-SA unless otherwise noted.