Destroyed
The Obsidian Glaive was an Obsidian Weapon used by Ronin.

Ronin used the Obsidian Glaive to steal the memories of Kai, Jay, Zane and Cole but Master Wu stopped him from completely stealing them, and he escaped with the Glaive. Ronin would also later use the Obsidian Glaive on the Serpentine, making them work for him. 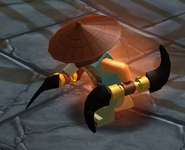 Ronin using two in the Tournament app
Add a photo to this gallery
Retrieved from "https://ninjago.fandom.com/wiki/Obsidian_Glaive?oldid=620916"
Community content is available under CC-BY-SA unless otherwise noted.