Can Jay Save Nya?

Ocean Invaders! is the 84th issue of the Ninjago Magazine. It includes 892184 Scuba Kai and Scuba Lloyd and Jay appear on the cover. The comic is titled Here Comes the Flood! It released on the 3rd of January 2022.

Shortly after Kalmaar arrived and flooded Ninjago City, he ordered Gripe and his soldiers to attack the city. Meanwhile, Kai, Cole and Lloyd were trying to help some civilians who did not evacuate the city in time. Later, they went near a toy store which sold inflatable toys that people bought so that they would not drown. The trio later went to a food district which was flooded, the sellers there were using buckets to try to remove the water from their food stall.

In another part of the city, Nelson and Antonia were bringing the remaing newspapers to a dry place, Nelson later asked Antonia what they should do with the giant rolls of printing paper, Antonia told Nelson she had an idea.

Meanwhile the three ninja went to the flooded streets where they saw the Commissioner trying to relax the many people swimming and sailing boats there, Nelson and Antonia later sailed to the streets with their giant paper boat made from the giant rolls of printing paper. Unfortunately they were attacked by many Maaray Guards, luckily they were saved by Jay driving his Sub car. After the Maaray Guards fled, Lloyd, Cole and Kai reunited with Jay, Nya and Zane, but their celebration quickly came to an end when they saw Kalmaar riding Wojira attacking the city. 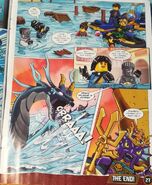