Ninjago Wiki
Register
Don't have an account?
Sign In
Advertisement
in: Magazine, Ninjago: Masters of Spinjitzu, The Island, 2021

View source
watch 01:36
We're Getting Mutants in the MCU - The Loop
Do you like this video?
Play Sound
“Back for more, eh? Admit it - your Ninja-Dingy is just too small!”
— Cecil Putnam

Ocean Race! is the 75th issue of the Ninjago Magazine. It features Zane on the cover and includes 892175 Island Jay (Island Jay with lightning nunchucks). The comic, Explorers at Sea, was written by Jan Dinter.

The ninja are sailing the Destiny's Bounty towards the uncharted island. They spot a large ocean liner ahead. Zane zooms in to see that Cecil Putnam of the Explorer's Club is manning the ship. When they get close, the Club rams their boat into the Bounty. Putnam tells the ninja to clear off, as rescuing Misako, Wu and Clutch Powers is a job for explorers. They boast that they have a course to the Island that avoids much of the fog and set off on their way. The damage done to the Bounty is too great for them to continue sailing. They know they have to stop the overzealous explorers from reaching the Island, lest they get lost too.

P.I.X.A.L. comes up with the idea to use the ninja's catamarans to tow the Bounty towards the liner to catch up with them. Cole and Nya pilot the catamarans while the rest of the team work on fixing their ship. They catch up to the Explorers, but Putnam just hurls more insults at them. P.I.X.A.L has another idea.

The ninja catch up again and fire a crate aboard the ship. The crate breaks open and Zane and Jay burst out, the latter riding a Jungle Chopper. The members of the Explorer’s Club jump aboard quad bikes and pursue Jay. Zane darts away to the ship’s control center, while Jay leads the Explorers away. He races across the ship’s deck, forcing them to chase him. Zane locates the control center, he downloads their route and changes theirs.

He races to find Jay, then the two jump off the ship and land back on the Bounty. Putnam, thinking they’ve bested the ninja, continue to taunt them and they sail away. Little do they know, that Zane had changed their course to take them right back to Ninjago. The ninja continue their voyage, hoping nothing else will get in their way. 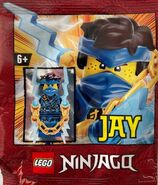 The included polybag.
Community content is available under CC-BY-SA unless otherwise noted.
Advertisement