View source
watch 01:25
Jurassic World: Dominion Dominates Fandom Wikis - The Loop
Do you like this video?
Play Sound
“The Ancient Order of Felis has been guarding the Cat-Eye Jewel for centuries, long before she was born.”
— Dillon to Wu and Garmadon, The Curse of the Cat-Eye Jewel

Sons of the First Spinjitzu Master

Centuries before Wu and Garmadon's journey

The Ancient Order of Felis (also known as the Jewel Guardians) is an organization that has sworn to protect the Cat-Eye Jewel.

The Ancient Order of Felis was formed long ago to guard the Cat-Eye Jewel. During their times, they fought against Nineko as she tried to get past their guards. They also sought out Komala to help protect the jewel.

Unbeknownst to Wu and Garmadon, they had started to climb the mountain of the Cat-Eye Jewel. This prompted the guardians to attack them and when they had fallen into the ravine, they left.

Sometime later, they came to the knowledge of Nineko training the two Spinjitzu masters and sent their scout, Dillon, to keep watch. When the time had come for the brothers to fetch the jewel, they heard him following along the way and tackled him to the ground. Once they felt Dillon wasn't a threat, they let him tell his story. He convinces Wu to go back with him to the temple, where he showed him around, before he took him upstairs to meet Komala. After Komala told her story of her encounters with Nineko, they rushed out to meet Adara and an army of guardians preparing for Nineko and Garmadon's arrival. Nineko then summoned an army of rain cats to distract the guardians while Garmadon fetched the jewel. After the battle, they gathered around to recover and sent the brothers to put the jewel back at the top of the mountain. 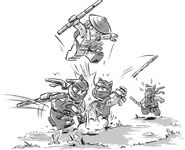 The warriors collided into each other and then slumped to the ground.

"It's just me. I've been watching you for several days. You need to listen to me. I am not your enemy. Nineko is!"

Dozens of guardians in green hoods were training in an obstacle course that reminded Wu of his father's training room.

"This is Wu, Adara. His brother, Garmadon has gone back to Nineko."

When they reached the base, they saw three lines of guardians there. Adara approached them.