View source
watch 01:25
Jurassic World: Dominion Dominates Fandom Wikis - The Loop
Do you like this video?
Play Sound
“I watched a dishonorable Metalonian blacksmith grow jealous of the Elemental Masters. I saw his fascination with an ancient, crooked tree with mystical amber, ensnaring anything that got too close – bugs, people, even pure energy. With this knowledge, he crafted the very first Chronosteel and used it to bind fractions of the Elemental Masters’ powers into those artefacts.”
— Skylor, Amber Spiral, Chapter 6

Unnamed (descendant)
Skylor Chen (descendant)
An unnamed man was a blacksmith from Metalonia and the original Elemental Master of Amber.

Many years ago, a blacksmith from Metalonia envied the Elemental Masters of their powers. At the place where he lived, there was an ancient, crooked tree with a mystical amber ensnaring anything that got too close. He then used his blacksmithing skills to turn amber into the first Chronosteel to absorb fragments of Elemental Powers from their masters. Channeling them into the Urn of Enmity, he created the new Elemental Power - Amber.

After a life spent absorbing other people's powers, Wu and Garmadon came to stop him. The original Master of Amber tried to use the Urn of Enmity again to absorb their powers, but the urn sucked his spirit instead.

Over the following centuries he tried to escape from his prison and he was uncovering Skylor's past, watching her manipulating the Elemental Masters and hurting her friends. 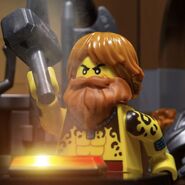