View source
watch 01:33
Wiki Targeted (Entertainment)
Do you like this video?
Play Sound
“
The original Prime Empire cabinet is somewhere in this building. And we'll search every floor until we find it.
— The Mechanic to the Kryptarium inmates, "Level Thirteen"
„

The original cabinet goes through a beta testing with Scott being the first gammer to try the game. When Milton Dyer temporary left the room, Scott finished the game and entered the game. Milton Dyer returned and realized the grave mistake he made.

A recording part of Gayle Gossip's report showed the original arcade cabinet being stored by officials.

Jay plays the legendary game before reaching level 13 and the arcade cabinet opening up a portal. He enters as well as hundreds of other gamers.

Cyrus Borg does an analysis of the original arcade cabinet and realizes that there are over eight-hundred gamers trapped inside Prime Empire. Cole then plays the game in order to enter the virtual world. When he completes it, he, Lloyd, Nya, and Kai enter Prime Empire.

Jay stepping towards an arcade cabinet in a promotional poster for Prime Empire. 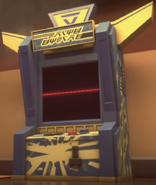