View source
watch 01:25
Jurassic World: Dominion Dominates Fandom Wikis - The Loop
Do you like this video?
Play Sound
“I bring you together to the Lost City of Ouroboros, before the statue of our very own Great Devourer, to speak of unity.”
— Pythor to the Serpentine, "The Snake King"

After retrieving the four Fangblades, Pythor returned to Ouroboros and began awakening the Great Devourer. However, Wu arrived and confronted Pythor just before the Great Devourer rose from the city and consumed them both. As a result, Ouroboros was heavily damaged, yet this didn't stop the Serpentine from using it as their base again, yet once more it was only temporary. The city was abandoned after the Serpentine journeyed to the tomb of the Stone Army.

During the Nindroid crisis, Pythor brought an army of Nindroids to Ouroboros, which was briefly used as their base of operations. While at the city, the Nindroids constructed and launched a giant rocket into space, en-route to a comet that held the remnants of the Golden Weapons.

The city was built many years ago and served as the place where the Serpentine studied the stars.[1] After the Serpentine War, Ouroboros was abandoned and later buried in a large sandstorm and became the Lost City.[2]

Pythor and Skales searched the desert for the Lost City of Ouroboros, and eventually unearthed it by turning a dial buried deep underground. With the city discovered, Pythor summoned the other Serpentine to the city's Slither Pit arena and challenged the four Generals for their staffs. With some help from Skales, Pythor successfully defeated the Generals and united the tribes, shortly before Lloyd Garmadon—spying on them in a Rattla disguise—accidentally revealed himself.

Taking Lloyd prisoner, Pythor manages to capture Samurai X and the ninja when they arrive, before pitting them against each other in a Slither Pit. However, Samurai X helped the ninja escape, defeating a few Serpentine and escaping with the Golden Weapons, although Lloyd remained a prisoner.

During the hunt for the Fangblades, the Serpentine largely abandoned the city of Ouroboros, opting to instead create a network of tunnels and a large underground fortress. When Pythor finally collected the four Fangblades, he immediately proclaimed that the Serpentine must return to Ouroboros to awaken the Great Devourer, but the Serpentine insisted on celebrating their imminent victory. This would prove to be a mistake, as it gave the ninja time to steal the Fangblades and head for Torchfire Mountain to destroy them.

However, Pythor snuck aboard the Destiny's Bounty and stole the Fangblades back, immediately heading for the Lost City of Ouroboros. Despite the ninja's best efforts, the Anacondrai General returned to the arena and used the Fangblades to reawaken the Devourer, and the city was heavily damaged as the monstrous serpent broke free of its prison beneath the arena.

Following the Great Devourer's defeat at the hands of Lord Garmadon, the Serpentine used a desert cave as a temporary base, as Ouroboros was apparently too badly damaged to live in. However, sometime later, the Serpentine repaired it enough to use as a staging ground for their forces. When the ninja disrupted the preparations, Lord Garmadon used the Mega Weapon to travel back in time and negate their existence. As a result of his meddling, the city of Ouroboros began sinking into the sand—as the ninja had never been formed, the city had never been found.

After the destruction of the Mega Weapon, the Serpentine returned to Ouroboros where they resumed hosting Slither Pits in the main arena. While Lasha was fighting Lizaru, Garmadon arrived in a Rattlecopter to gather the Serpentine Generals in order to search for the Island of Darkness. They soon departed in a Rattlecopter over the Endless Ocean, only for Garmadon to be pushed out into the ocean by Skales.

The city of Ouroboros appeared to have been Pythor's base of operations prior to his return to New Ninjago City, as he led the Nindroid army to it after retrieving the Overlord's body from the Nindroid MechDragon. The villains subsequently used the city to launch Arcturus and hold Kai captive.

The ninja drove through the city on route to Ed & Edna's Scrap N Junk from Kryptarium Prison.

The Lost City of Ouroboros is located in the Sea of Sand, while the nearest town, Ninjago City, located on the edge of the desert is not visible. The whole city is built on desert sandy land. Below the arena in the center of the city is a large stone cave where the Great Devourer was imprisoned.

Ouroboros as the only known Serpentine city is built around the Slither Pit arena in the center of the city, which is octagonal in shape. The arena consists of paved ground with the symbol of a twisted snake. Directly along this floor is a large stone cave in which the Great Devourer was imprisoned. On the edge of the arena is a large orange-yellow stone statue depicting the Great Devourer. Stairs lead to the back of the statue, which can be used to enter the Devourer's mouth. Along the sides of the statue are smaller statues depicting other snakes and directly next to the statue rise two large pillars. There are seven square buildings on the sides of the arena, including a prison. On their roofs there are grandstands from which Serpentine can watch the fight in the arena. Among these buildings are statues of cobras.

There is an empty sandy space a few foots around the arena and there are also eight trapezoidal orange-yellow buildings arranged in an octagonal shape. Behind each of these buildings there is another, slightly larger, and one behind them, which is, however, partially submerged in sand. Cylindrical turrets are built at the corners of each building. There are low railings on the roof of each building and they can be walked on as they are horizontal. In each of these buildings there are several apartments that used to be inhabited by Serpentine.

Ancient Serpentine city buried beneath the Sea of Sand following the Serpentine Wars, this site was also known as the Lost City of Ouroboros. It is the only known Serpentine city, and seems to be a mixture of different styles of architecture. In the center of the city is the infamous Slither Pit Arena. Legend had it that the Great Devourer slumbered beneath the city, and it is possible that the spirals and circles that appear so often in carvings in Ouroboros may refer to its presence. After Pythor successfully awoke the giant serpent, the creature badly damaged the city as it broke free. Despite the damage, it would still be used as a Serpentine base in later adventures and continues to exist today.[2]

Ouroboros means "snake or dragon biting its own tail" in the Greek language. This is referenced when the Great Devourer is defeated in a similar manner, as well as in the various spiral and circle designs around the city. The city's original name was "The Forsnaken City".[3] 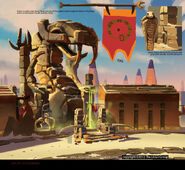 Dial to emerge the city from the sand