Paleman (also referred to as Mr. Pale) is the current Elemental Master of Light who competed in Master Chen's Tournament of Elements alongside the other Elemental Masters of his generation. Paleman witnessed most rounds of the event, but ultimately had his element stolen by Chen in a bid to turn his army into Anacondrai.

Paleman and the Elemental Masters reclaimed their elements, yet Chen's plan still succeeded. Paleman and his allies rallied the people of Ninjago to fight Chen's followers at the Corridor of Elders. Despite their best efforts, they were overpowered by their adversaries until Garmadon sacrificed himself to curse Chen's army. Months later, Nadakhan imprisoned Paleman and the other Elemental Masters in the Sword of Souls to eliminate all opposition.[1] After Jay made his final wish, recent events were erased and he was freed.

After the supposed demise of the original Ninja, Paleman joined The Resistance to oppose Lord Garmadon's oppressive rule. After getting the support of Ninjago City's civilians by stopping hunt on their allies and Lloyd's speech on TV, Mr. Pale was caught during an ambush on the Resistance base and sent to Kryptarium Prison. Sometime after that, the Resistance members and prisoners of Ultra Hunt, including Mr. Pale escaped Kryptarium to help the Ninja. After Lord Garmadon's arrest and city's liberation, Mr. Pale came to celebrate this with the Ninja, the Resistance members, and Ninjago City civilians.

Paleman was born as a descendant of the previous Elemental Master of Light, his distant relative. He unlocked his True Potential before events of The Tournament of Elements.

Paleman was one of those invited to participate in the Tournament of Elements. He accepted and met the other Elemental Masters on the New Ninjago City pier at midnight where they were picked up by Clouse to be taken to Chen's Island. While on the ferry, Paleman noticed the Ninja watching him and turned invisible much to his onlooker's amazement.

Once on the Island, Paleman was present at Chen's opening ceremony. Once the first challenge began, he fought the other Masters for a Jadeblade. Cole managed to find one, though Paleman vanished and stole it from the Ninja of Earth. However, Cole loosened dust from the floor above them to see Paleman and used Spinjitzu to send him flying. He managed to find another blade however and advanced to the next round of the tournament.

During a meal in the Chow House, Paleman asked the Ninja if he could sit with them, but Jay immediately told him to go away. As Cole told him that was rude, but the Ninja of Lightning said he couldn't trust anyone and blames the island for this attitude.

The next morning, Paleman ate breakfast by himself in the Chow House, then later observed the four battles that took place throughout the day.

Paleman observed Skylor and Jacob's duel, though became angered at the Ninja when their suites were removed and they were all forced to sleep in the Chow House. They were however awoken in the middle of the night by Clouse to partake in the Thunderblade tournament. Like the other Masters, Paleman chose to side with Chamille during the event, though when the Ninja revealed Chen's plot to steal their powers, he switched sides and helped Lloyd win. When Chen accused Lloyd of cheating, Paleman threatened to leave the Tournament if the Green Ninja was eliminated.

A secret alliance between the remaining fighters (apart from Shade) was quickly formed, and Paleman attended the banquet that Chen held in honor of making it to the final round. When Lloyd expressed suspicion about the feast, Paleman tipped his hat to assure the Green Ninja that they were still in an alliance. However, he was astounded when Chen revealed that he was in fact stealing powers with the Staff of Elements, and intended to give it to the winner. With this news, Paleman withdrew from the alliance in order to get the staff for himself.

The next day, Paleman and the other remaining fighters boarded Chen's Blimp and were flown high above the Island. Once in position, Chen revealed their objective; to parachute down after a few seconds of time and locate Nya. When the floor of the blimp gave way, Paleman desperately tried to grab one of the parachutes and succeeded in stealing Lloyd's. Yet soon after landing on the Island, Paleman was captured by Clouse and Eyezor, and taken before Chen. Clouse stated to prove the hardest to find due to his powers though Paleman claimed that he would never get away with his scheme, Chen dismissed him because he was boring and had him thrown in a Vengestone prison along with the other Masters.

Paleman then watched as the rest of the masters were taken (save Lloyd, who evaded capture and Skylor, who was the spy) and was seen watching Kai get thrown in the cage. He appeared worried, knowing what fate Chen had for them.

Paleman and the remaining Masters were taken to the Anacondrai Temple where their powers were stolen. They were then sent to work in the Noodle Factory, however, upon arrival, they discovered that the other Masters were already planning a breakout and joined in.

When the time came, Paleman assisted in their escape. When Kai destroyed the Staff of Elements, Paleman's power was restored and before long, the Elemental Masters had taken control of the Island.

Like the other Masters, he stayed at the palace to keep an eye on the Anacondrai Cultists and later fought against them when they were transformed by the spell. Soon after Chen led his warriors off the Island, Paleman, like the Ninja and the Masters, were able to summon their Elemental Dragons.

Paleman used his light dragon to fly back to Ninjago only to find that Chen hadn't invaded yet.

He is soon ordered by Lloyd along with the other masters to watch over the city with the other Masters. When twenty noodle trucks began heading out, Paleman and his allies prepare to confront them only to see them going in various directions to presumably attack the villages, Paleman pursued one of them only to find it empty. Like many others, he lost his dragon out of fear and was left stranded which part of Chen's plan to invade without a problem.

After receiving a message from Neuro, Paleman met up with the other Masters in the Samurai X Cave. There, they decided to make their stand against Chen's army in the Corridor of Elders. During the ensuing battle, the Paleman fought bravely against the imposter Anacondrai before watching the spirits of the Anacondrai Generals banish the enemy to the Cursed Realm.

Afterward, he celebrated with the other Masters and Ninja when victory was achieved, promising future aid when needed.

At some point, Nadakhan attacked Paleman, seeking to remove all opposition and succeeding in absorbing his soul into the Sword of Souls. Fortunately, as a result of Jay's final wish, Paleman's encounter with Nadakhan didn't happen, thus freeing him from the Sword of Souls with no memory of the encounter.

Mr. Pale sneaks up on Dareth, frightening him, and later says that he has a habit of sneaking up on people and apologizes.

Mr. Pale watches a training fight between Dareth and Karlof, and then start making a plan to return the airwaves. Later, he, Lloyd, Skylor, Neuro, Shade, and Griffin Turner are getting into former Borg Tower, there, Mr. Pale use invisibility to get into an elevator with Harumi, and after her leave, he gets others here. Soon, Skylor combined his and Shade's powers to hide everybody from Lord Garmadon. After that, they break into a television studio and capture Ultra Violet and some SOG members, to shoot Lloyd's speech to people of Ninjago City, and when it ended, they escaped from the studio by breaking a window and drive away with garbage trucks.

Mr. Pale and other Resistance members were celebrating their appearance on TV and support of Ninjago City civilians and discussing more help from several allies.

Mr. Pale was in the Resistance base when ambush started. He was taken and thrown by Killow using Oni Mask of Deception. After an ambush, Mr. Pale was caught and sent to Kryptarium Prison.

Mr. Pale was first seen in his cell in Kryptarium, saying "The Resistance never quits!", and after Karlof, Ronin, and Griffin Turner got out from their cell, he was freed by Griffin Turner. Later, he probably went to help the ninja to defeat Colossus. After Lord Garmadon's and SoG biker's arrest, Mr. Pale was at the celebration of victory over Garmadon's forces and the liberation of the city.

Mr. Pale wears a maroon jacket and maroon pants. He wears a lime green shirt under his jacket which is decorated with 100 dollar bills. He also has a golden chain necklace with a medallion on it, gold sunglasses, and a tan fedora. As part of his element of Light, his face is always invisible, and he can turn his whole body invisible too.

Paleman in the background of a promotional poster for the Tournament of Elements.

Paleman behind the Ninja, with the other Elemental Masters and the citizens of Ninjago in the Tournament of Elements mural.

Interceding for the Ninja.

Sitting on the banquet.

In Chen's Blimp, flirting with Skylor.

In prisoner attire. (Note: despite his powers having been taken away, his face is still invisible). 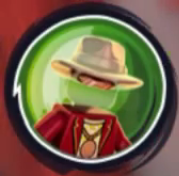 Behind the garage doors.

Sneaking up on Harumi in the former Borg Tower.

With several members of the Resistance.

Sitting with other members of the Resistance. 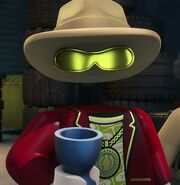 Retrieved from "https://ninjago.fandom.com/wiki/Paleman?oldid=484417"
Community content is available under CC-BY-SA unless otherwise noted.