Not to be confused with another Tour Guide.

“I know a guy, who knows a girl, and she knows this girl who knows a guy. Well, this guy knows a girl who's a real estate agent and she can help you find a place, if you catch my drift.”
— Nya to the ninja about Patty Keys in "Darkness Shall Rise"

Patty Keys was present at Mega Monster Amusement Park when Jay turned into a snake and attacked him along with several others present.

Patty Keys attended the Take Back Ninjago Rally in Ninjago City, cheering alongside the crowd. However, when the Great Devourer attacked, she was forced to flee with everyone else from the ravenous serpent.

Meeting Nya after the latter learned about her through a chain of multiple individuals, she supplied the ninja with a cramped, decrepit apartment to live in. Attempting to highlight the near nonexistent good parts of their apartment, she complied with their request for a better room called Hero's Suite, introducing the Hero Loft, a luxury apartment, and proudly listing its many features. When Jay asked to get a hero discount for defeating the Great Devourer, she replied that it had technically been Garmadon who had slain the seemingly-immortal beast, refusing. Afterward, when the ninja were ultimately unable to pay for the Hero Loft's rent, she presumably sold their apartment back to them.

Patty is one of the spectators of the Ninjaball Run race.

Patty later visited the Ninjago Museum of History, attracted by its latest discovery, a massive, four-armed Giant Stone Warrior. Initially amazed, she watched in horror alongside the rest of the audience as the Great Devourer's venom seeped through the sprinkler system, infecting the statue and resurrecting the warrior, causing her to flee in panic.

While fleeing from the Stone Army, Patty was alerted by a message on TV to head to the NGTV office building, where she and others would be evacuated. Complying, she headed to the top of the building, boarding the Destiny's Bounty alongside other citizens and being evacuated to safety near the coast.

When the ninja began their voyage to the Dark Island, she cheered them on, rooting for Zane in particular.

Following the rebuilding of Ninjago City and several other events, Patty eventually ceased being a real estate agent, settling with becoming a tour guide, often visiting the Temple of Airjitzu in particular.

While touring the Haunted Temple, Patty told the mysterious tale of Master Yang, and how his students would mysteriously disappear. Laughing off the supposed myth that staying in the temple past sundown would turn one into a ghost, she dismissed the speculation of the ninja and continued on.

Later, while giving another tour of the temple, Patty stumbled across the massive crater that had taken its place, shocked by the phenomenon as she witnessed the Haunted Temple float into the air, becoming part of Djinjago.

Patty was on a bus guiding a tour over Ninjago City before Wojira and Kalmaar flooded the streets, after which she was urged inside along with the rest of the group by Dareth, although the bus started to leak. Luckily, she was saved alongside the others by Jay.

After Nya defeated Wojira, Patty Keys and the other civilians watched from a rooftop as the water drained from Ninjago City. 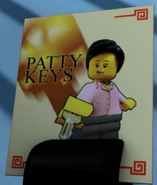