Alive (resurrected)
The Pyro Whippers are members of the Pyro Vipers.

The Pyro Whippers were released from their sarcophagi and begin attacking the ninja. Jay used Spinjitzu to defeat them, but doesn't realize that he is tied with the rest of the ninja.

A couple of Pyro Whippers were released from their sarcophagi in the Ninjago Museum of History.

A couple of Pyro Whippers attacked Lloyd and Nya when they got near Aspheera. Despite being outnumbered, Zane arrived in his ShuriCopter to save the ninja.

The Pyro Vipers began their assault on the Monastery of Spinjitzu in order to find Wu.

Discovering Wu is in Hanger Bay, the Pyro Whippers watched the Elemental Cobras run into the door.

After the Elemental Cobras broke down the door, Wu is nowhere to be found which confused the Pyro Vipers. They then discovered Wu when Jay gave their hiding spot away.

After P.I.X.A.L. used the Titan Mech to knock Aspheera, the Pyro Vipers began attacking the ninja. Aspheera was able to hold them down until Lloyd, Nya, and Zane arrived with the second Scroll of Forbidden Spinjitzu. 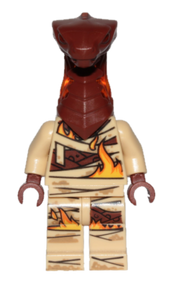 A Pyro Whipper in the It's Getting Hot poster

Add a photo to this gallery
Retrieved from "https://ninjago.fandom.com/wiki/Pyro_Whippers?oldid=567529"
Community content is available under CC-BY-SA unless otherwise noted.