Deceased
Ghost Warrior Pyrrhus was a former prisoner of the Cursed Realm.

Note: Due to all ghost warriors being identical in appearance, it is impossible to determine who is who in the television series. As such, any appearances of a ghost warrior will be cataloged here, regardless if they are in fact Pyrrhus.

Pyrrhus could almost be called "fun-loving," if your idea of fun is scaring folks out of their wits. This ghostly warrior has been known to throw a sheet over his head and yell "Boo" just before drawing his sword and attacking. His sinister laugh usually means someone is about to get a nasty joke played on them.[link unavailable] 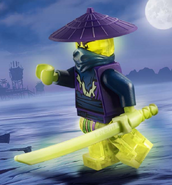