Ninjago Wiki
Register
Don't have an account?
Sign In
Advertisement
in: Ninjago: Masters of Spinjitzu, 2015, Vehicles,
and 13 more
English

“R.E.X. And could you have a little sympathy? Sold her so I could buy this place. As you can see, I'm trying to make an honest living.”
— Ronin in "Stiix and Stones"

Intact
R.E.X. is the personal aerial vehicle of Ronin, used for combat and escape. It also doubles as a submarine.

After Ronin stole the ninja's memories atop Spinjago, he used the R.E.X. to escape.

Ronin would use the R.E.X. to escape the ninja after his mech's destruction.

After his final defeat at the ninja's hand, Ronin called on the R.E.X. to escape yet again.

Ronin kept R.E.X. under his store in Stiix for use as an emergency escape, though claimed that he had sold her to purchase the pawnshop. Such an emergency came when Morro and the ninja surrounded him demanding the Scroll of Airjitzu and he grabbed hold of the airship as it flew upwards. However, Morro used his Wind to knock the mercenary off R.E.X. and claimed the scroll for himself.

Ronin eventually reclaimed his airship and flew to where Kai was becoming trapped by Strangle Weed, offering him a ride in exchange for something. When the Fire Ninja was unable to provide anything, Ronin flew off, though returned when Kai thought of something. He then dropped the Master of Fire off in Stiix, then left in R.E.X.

After being bribed by Nya, Ronin flew her to the Samurai X Cave to retrieve her samurai gear.

Upon returning to Steep Wisdom after claiming the Sword of Sanctuary, Ronin used the time to clean R.E.X.. Later when he stole the sword, he activated the ship's autopilot as a decoy while he escaped down the river.

Later after Ronin was betrayed by Morro, he sent R.E.X. to save the ninja, along with a recorded apology, and the real location of the tomb. However, he also gave the airship to them as an apology for his actions.

The ninja used the ship to travel underwater to the Tomb of the First Spinjitzu Master. Unfortunately, when they got there, R.E.X.'s autopilot programming kicked in and she submerged, leaving the ninja with no way out and unarmed as they left their Aeroblades in her.

Ronin used her to travel to Stiix and dumped his profits within her on Morro, who was levitating his shop with the Wind.

In order to pursue and capture Kai and Nya, Ronin flew in R.E.X.. He used R.E.X.'s special hologram device to trap them in a "dead end" though it was really just a hologram. 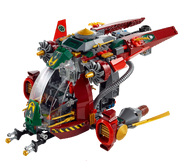 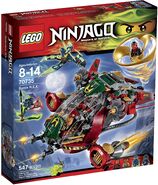 R.E.X. operating as a submarine