View source
watch 01:33
Wiki Targeted (Entertainment)
Do you like this video?
Play Sound
“
Look, you want it or not? This, plus the other three, plus my car, that's five vehicles. That gets you in the race.
— Scott to the ninja in "Racer Seven"
„

Operational
The racing bike is a bike owned and used by Lloyd to compete in the Speedway Five-Billion.

After Lloyd gets back from talking with Racer Seven, he works on his vehicle to prepare for the Speedway Five-Billion.

Lloyd and the rest of the ninja head out of Scott's garage after being invaded by the Red Visors.

The Fast Chickens enter the race with Lloyd using his racing bike as his vehicle. With the racing bike, Lloyd is one of the three ninja left standing and helps Racer Seven win the race. 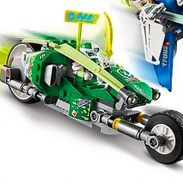