Ninjago Wiki
Register
Don't have an account?
Sign In
Advertisement
in: Citations needed, Galleries needing organization, The Hands of Time,
and 13 more
English

View source
watch 01:25
Jurassic World: Dominion Dominates Fandom Wikis - The Loop
Do you like this video?
Play Sound
“Ah, I just love the smell of screams in the evening.”
— Raggmunk, "A Line in the Sand"

A Time of Traitors
70624 Vermillion Invader

Michael Adamthwaite
Commander Raggmunk was a high-ranking Vermillion who commanded the latter alongside Commander Blunck and Supreme Commander Machia.

Raggmunk was a child of the Great Devourer like all Vermillion. He possessed the hive mind ability like Machia and Blunck, making the three of them the leaders of the Vermillion under Krux and Acronix.

While Blunck was trying to show the Time Twins the plan, Raggmunk constantly interrupts him.

Later, they went to Ninjago to kidnap its citizens.

Raggmunk and Blunck watch as the Vermillion steals all the metal in Ninjago.

Raggmunk commanded the Army to steal the metal from the Mega Monster Amusement Park. However, he received a message from Machia stating they need to get the Slow-Mo Time Blade from the Sea of Sand.

As they drove toward the Time Blade, Raggmunk managed to make the ninja crash by throwing snakes at them.

They got the Blade and when Raggmunk missed the ninja, Blunck got them. After the ninja are freed from the time bubble, the two commanders fought over the Blade and accidentally slowed them down.

The ninja got away with the Blade, and they used it on the Army. They failed, and they informed Machia.

In their failed attempt to explain how they lost the Time Blade, Raggmunk and Blunck planned on trading Cyrus Borg for it, except they wouldn't give Cyrus Borg to them. But the Time Twins told them that their plan wouldn't work.

Arriving at the Temple, they started to attack the ninja.

As the Blunck and Raggmunk brought Wu to their dome, they were told that Machia has been promoted and had to obey her, which leaves them shocked and angry.

As Blunck and Raggmunk guarded Wu, the latter told the other he missed breakfast. This gave him an idea to take him with them.

When they came back, Blunck fought Lloyd while Raggmunk ran away with Wu. Lloyd caught up to him and tripped him.

Later, Raggmunk and Blunck were able to regain Wu and bring him back to the cell. Machia figured out they lost Wu with her hive mind and scolded them.

When Machia shows Wu to Kai, Nya, and their parents, Raggmunk says they had him the whole time.

Blunck and Raggmunk tried to find any sign of the ninja but found none. They celebrated their victory and claimed they'll be getting a promotion. They recruited the Army to the Dome.

Later, when they see Cyrus Borg trying to sabotage the Iron Doom, the Vermillion fought the ninja until they were instructed by Machia to go there.

Raggmunk and Blunck attacked the Elemental Masters and young Wu in the past and then went to report to Krux and Acronix on how the battle was going. Krux and Acronix changed their plan and knew they only needed the Vermillion snakes that made up the warriors. They then attacked Raggmunk and Blunck, crushing the pair into snakes and taking their helmets. The snakes then fused with the Iron Doom, which became lost in time.

Commander Raggmunk will stop at nothing to please Krux and Acronix, but because he is not the brightest warrior he finds himself (along with Blunck) bumped down to less and less important duties. That said, nothing is more dangerous than a military man with a lot to prove and nothing to lose. He uses his helmet to control the Vermillion Warriors through the Hive Mind. Raggmunk is ultimately smashed by Krux and Acronix back into his component snakes so they can use that helmet to telepathically control the Iron Doom. His personality and voice are absorbed into the Iron Doom.[citation needed]

Raggmunk was one of the commanders to Krux and Acronix. He and Blunck keep trying (but failing) to please the Time Twins and prove themselves better than Machia. After the Time Twins time-travel back in time to the Battle for All of Time, they relieve Raggmunk, along with Blunck, of their duty.

Raggmunk views Machia as competition, he and Blunck try their best to please the Time Twins and prove that they are better than Machia.

Raggmunk and Blunck in an illustration by J. Jesús Fernández

Raggmunk explaining the "setbacks" in "Lost in Time" 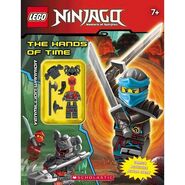 In The Hands of Time book
Deutsch Русский
Community content is available under CC-BY-SA unless otherwise noted.
Advertisement