“
The City of Ouroboros is miles away! This Rattlercopter will never get us there in time!
— Pythor in "The Rise of the Great Devourer"
„

Unknown
The Rattlercopter is a helicopter created by the bite of the Fangpyre, much like the other Serpentine vehicles.

When the Fangpyre invade Ed & Edna's Scrap N Junk to use the scrap to make vehicles, some snakes bit an old helicopter, turning it into the Rattlercopter. When the ninja arrive the next day, the Fangpyre escape after the battle, with Fangtom and Lloyd riding on a platform dangling from the helicopter. However, Jay pursues the copter in his new Storm Fighter and manages to steal the Fangpyre Staff. Nya later drops it though, and the Rattlercopter flies down to the ground for Fangtom to retrieve it.

The Fangpyre ride their vehicles, including the Rattlercopter, into battle against the Hypnobrai tribe in the Glacier Barrens. However, Fangtom and Skales team up and betray Lloyd. The latter tries to regain control by climbing on top of a Rattlercopter to bark orders, but the biomechanical vehicle notices him and swings its tail back to throw Lloyd off.

Pythor jumps onto the Rattlercopter platform to make an escape after stealing the four silver fang blades from the ninja. Noticing that the Rattlercopter won't make it to Ouroboros in time, Skales tells Pythor about their plan to get to the city faster, the Serpentine Express.

In the Lost City of Ouroboros, Lasha and Lizaru are fighting in the Slither Pit arena. The fight is interrupted when a Rattlercopter lands in the arena, prompting Chokun to set up a red carpet with a seat and an umbrella for Lord Garmadon. The four-armed villain informs the Serpentine Generals that he has an ingenious plan, saying that Captain Soto's journal mentions a fabled island known as the Island of Darkness. Skales is skeptical, but the Generals leave with Lord Garmadon in the Rattlercopter. 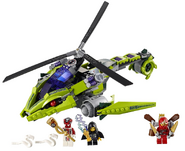