View source
“A Ravture youngling. Don't touch him. It needs to learn to fly on its own.”
— Garmadon to Lloyd, "Blackout"

When Lloyd comes across a baby Ravture alone in the mountains, Master Garmadon told him to let it be. Lloyd was about to move on when he sees the bird falling and helps it. Its father arrives and attacks Lloyd and Garmadon, but Lloyd was able to save him. He then sees the baby fall and tries to help, but was relieved to see it fly on its own. 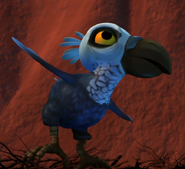