View source
watch 01:25
Who is Ray?
Do you like this video?
Play Sound

It was a message. I stamped all my work, hoping one day someone would figure out where we were. So that together we could stop Krux and Acronix's plan.

Ray to Kai and Nya in "Pause and Effect"

Vincent Tong
Ray is the former Elemental Master of Fire, the husband of Maya, and the father of Kai and Nya. Ray fought alongside the Elemental Alliance in Serpentine War, which resulted in their adversaries being sealed in various tombs, with him personally imprisoning the Anacondrai tribe within their tomb in the Sea of Sand.

Following the war, Krux and Acronix, the Elemental Masters of Time, betrayed the alliance. Ray and Maya forged four blades using Chronosteel, which were used to sap the Time Twins' Elements before they were lost to time. However, Krux evaded his condemnation. Ray and Maya would have two kids, Nya and Kai, with the latter inheriting Ray's element.

Krux assumed a false identity and would eventually capture Ray and Maya, forcing them to create armor and vehicles for his Vermillion army. Ray and Maya were forced to comply as their children would be in danger if they refused to obey the demand. Many years later, Kai and Nya soon learned what happened to their parents, and reunited with them. However, Krux and Acronix used Kai and Nya to claim the last Time Blade. Ray was struck by one of the blades and began aging rapidly. When Kai and Nya went into the past and helped Wu defeat the Time Twins, Ray was saved and was finally free of his servitude.

As a teenager, Ray was very poor, wearing ragged clothes and going door to door selling custom made weapons to make a living for himself.[1]

At one point when Ray was turned down, he asked a nearby stranger to help him regather his weapons, not knowing the stranger was his future son, Kai, brought back in time by Nadakhan the Djinn.[1]

At some point, he discovered his powers and became the Elemental Master of Fire.

One night, Ray and Master Wu were searching for samurai bandits, but when he spotted the silhouettes of scarecrows, he mistook them for the bandits and sprung into battle. The next morning, he was forced to apologize to the farmers that owned the scarecrows for his mistake.

At one point in their lives, Ray and Maya were handcuffed to a pole, and they were able to get loose by climbing over the top.[2]

As part of the Elemental Alliance, Ray fought alongside Wu and Garmadon in the Serpentine War. Not long Ray sealed the Anacondrai into their tomb using a Sacred Flute,[3] the Time Twins betrayed the Alliance, planning to take over Ninjago.[4] Wu had an idea and commissioned Ray and Maya to build blades made of Chronosteel, which would absorb the twins' powers. The crafting exhausted Ray and Maya, but they completed the weapons and rested while the rest of the Elemental Masters defeated the twins.[5] Shortly afterward, Wu found the Reversal Time Blade, which he instructed Ray and Maya to hide in the Boiling Sea so that it would be impossible to retrieve without the combined efforts of the Elemental Masters of Fire and Water.[6]

With Maya, Ray fathered two children, Kai and Nya, and his element of Fire was inherited by Kai. The parents decided to named Nya after Nyad, the supposed first Elemental Master of Water.[7] Later on, Wu wanted Ray to become a ninja, though he declined in order to stay at home with his wife to take care of their children and work at Four Weapons Blacksmith.[citation needed] As such, the old master entrusted him with the map to the Golden Weapons, made in the event of Wu's demise to ensure that the powerful artifacts could be retrieved in times of darkness.[8]

Ray often told his children stories of dragons, mythical creatures that belonged to the worlds of both the living and the dead.[9] He would often teach them proverbs such as "No matter how much fire you have, experience isn't something you learn overnight"[8] and "The world works in mysterious ways.[10]

Sometime later, Ray and his wife befriended a man named Dr. Sander Saunders, who became very close to them. However, the man revealed himself to be Krux; he wanted revenge for their contributions in the loss of his powers and his brother being lost in time. Krux threatened to harm a young Kai and Nya if his demands weren't met. As a result, Ray and his wife were forced into Krux's services and separated from their children. Following their disappearance, Kai and Nya became the new owners of his blacksmith shop.[5]

Following the defeat of Clouse, Wu would suffer a horrible nightmare in which he saw Ray and his wife Maya forging something terrible in a pit of flame and smoke for the Time Twins.

When Kai and Nya went back to the blacksmith shop to celebrate Day of the Departed, they had pictures of Ray and Maya.

Ray was working in the blacksmith station in the Vermillion Swamp when someone soon bursts in, proclaiming him a traitor. Ray noted that the intruder was dressed in red, like the Vermillion before he pulled out his Dragon Blade and attacked. When the intruder shot a fireball at him, Ray was shocked and realized the intruder was his son, Kai before someone else comes in, trying to diffuse the situation before shooting water at him, making Ray realize that the second person was Nya. But his stubborn inherited son was too enraged by his supposed betrayal before Maya appears and managed to diffuse the situation herself. Ray soon explained about how they forged four Chronosteel weapons, which tired them out of not participating before they would eventually become the Time Blades following Krux and Acronix's banishment. He and Maya lived in peace with their two kids before meeting Krux, under the guise of Dr. Saunders before he had them create armor for the Vermillion warriors. When asked about his symbol, he said it was a message before telling the two they have to leave, but they were too late as Krux and Acronix arrived.

Ray apologizes to his children, saying that they didn't expect anyone to return. He gave them the Dragon Blade to complete their mission. He tried to tell them what they need to do, but Kai didn't want to waste time so they dove in.

When they returned, the twins prevented them from saving Wu. During the fight, Ray pushed Kai and took Acronix's Time Punch instead. The twins used the Pause Time Blade on them and they start to plummet into the Boiling Sea until Kai and Nya used the Fusion Dragon.

When Kai said the dragon wasn't fast enough to reach the Iron Doom in time, Maya grabbed Ray and jumped off, giving them the speed they needed.

After Kai, Nya, and Wu followed the twins, Maya introduced Ray and herself as Kai and Nya's parents. There is nothing they can do but wait for their return. However, he revealed that he was hit with the Time Punch and the Reversal Blade can help him.

Eventually, they start to notice the city has no technology and that Zane has gone back to his original state.

When technology returned, Ray was getting older. Kai and Nya returned and healed him.

After catching up with Kai and Nya, Ray and Maya went on a tour of Ninjago.[11]

At some point, Ray and Maya returned to the blacksmith shop and resumed work there.[12]

Upon learning from Kai that Nya was having problems with her powers, Ray and Maya go visit her, with Ray having to handle all the luggage.

Ray was present at Nya's memorial, mourning the departure of his daughter alongside Maya while also seeing how hard Kai was taking it. 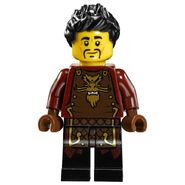 Ray, with Maya in the Hands of Time mural.

Ray during the Serpentine War

Young Ray, as a poor blacksmith

Kai and Nya honoring their parents on the Day of the Departed celebrations.

He and Maya fight against the Time Twins

Kai finds out his father is working for the Time Twins

Ray and his wife are reunited with their children.