View source
watch 01:25
Jurassic World: Dominion Dominates Fandom Wikis - The Loop
Do you like this video?
Play Sound
“Some few escaped, but the Re-Awakened roam the caves, hunting us now, hoping to capture us for the Skull Sorcerer.”
— Gulch to Kai and Zane, "Trial By Mino"

Into the Dark
71721 Skull Sorcerer's Dragon

The Re-Awakened, also known as the Awakened Warriors or the Dark Skeletons[2][3], were undead skeletons resurrected to fight as the Skull Sorcerer's army. The lived in the Dungeons of Shintaro.

At some point before the Battle for Shintaro Mountain, an unknown army of warriors died in the Dungeons of Shintaro, where their bones remained. Many years later, King Vangelis brought them back to life as undead skeletons through the Dark Magic of the Skull of Hazza D'ur.

The Re-Awakened monitor the work of the Geckles and Munce while forcing Cole into labor. When Cole is caught talking to a Geckle, an Awakened Warrior uses his whip to force him to work.

Later, the Re-Awakened serve porridge to the inmates and watch over the tribes.

The ninja arrive at the Dungeons of Shintaro and defeat a couple of Re-Awakened to rescue Cole. When the reinforcements arrive, the ninja easily defeat the skeletons; however, the Skull Sorcerer uses the Skull of Hazza D'ur to revive his army and take down the ninja.

While the ninja are working, Cole catches sight of an Awakened Warrior whipping a Mino. Angered, he throws his pickaxe at the skeleton. The Awakened Warrior loses his whip and attempts to punish Cole, but Nya grabs him and Cole destroys him. Nevertheless, more reinforcements arrive and the ninja are imprisoned.

The ninja begin their escape plan by freeing themselves and destroying the skeletons surrounding them. They then free everyone, but more skeletons arrive. The ninja buy time by pouring Glop on the warriors and releasing the Minos.

The Skull Sorcerer flies to the Dungeons of Shintaro and demands the Re-Awakened to open the door to a dead Grief-Bringer. He then uses the Skull of Hazza D'ur to revive the former dragon.

The Awakened Warriors follow everyone to the Geckle Strong-Cave. In order to allow the Munce to close the gate, the ninja buy time by fighting the Re-Awakened. When Murtessa finally breaks the chains, the ninja flee the fight.

Barricaded inside, the Re-Awakened use a ram to destroy the wooden door and with the help of Grief-Bringer, they destroy the door. The ninja strike a deal with the Skull Sorcerer to surrender themselves, but in exchange, the Munce and Geckles could be free. Some of the Re-Awakened head with the ninja, but the others stay behind. The Skull Sorcerer ends up double-crossing them and captures everyone.

Enslaved once again, the Awakened Warriors observe all of the Munce and Geckles and whip anyone for stopping. An Awakened Warrior is about to whip Murtessa, but Korgran punches him and hands the keys to free themselves.

As Cole is fighting the Skull Sorcerer, the Munce and Geckles free themselves and start fighting. In addition, the Upply and ninja soon join and are forced to keep up with the Re-Awakened being rebuilt.

The ninja, Geckles, Munce, and the Upply continue to fight the Awakened Warriors, but are overwhelmed by the number of skeleton warriors and the fact they keep restoring themselves at a quick pace. Luckily, Vania and the Army of Shintaro arrive and help fight the warriors.

While Cole is fighting the Skull Sorcerer, he unlocks the Spinjitzu Burst and destroys the Skull of Hazza D'ur. This causes every Awakened Warrior to crumble to bones once more.

The ninja have almost as much history with Skulkins as they do with snakes, but they've have never seen anything like this before! Brought back to life by the Skull Sorcerer, the Awakened Warriors can rebuild their bony bodies whenever a part breaks off them, making them almost invincible![4]

The Re-Awakened were made out of black bones and had no flesh covering their skeleton. They had glowing, green eyes when they were alive, but when they were defeated at any time, their eyes would turn to the same color as their body. Moreover, they all wear helmets with a bone placed on top.

For most characters, defeating the Re-Awakened was very effortless due to being made out of bones. They would shatter on contact with any weapon or fighting ability.

Due to the power of the Skull of Hazza D'ur, they are one of the tougher villainous factions due to the ability to rebuild themselves after being destroyed. Unlike the Vermillion, fighters are unable to separate any pieces of the Re-Awakened since they will automatically restore themselves. This makes it very difficult for fighters since they'll have to constantly fight. It gets even tougher when there are a mob of Re-Awakened as they can overwhelm a group of fighters as seen with the ninja in their first attempt to rescue Cole. 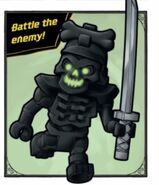