Destroyed
The Realm Crystal was an ancient gem-like artifact created by the First Spinjitzu Master in the years following Ninjago's creation. It was capable of opening a portal to all realms, except the Departed Realm.[1] Once kept in its creator's hidden tomb, the Realm Crystal was sheltered from anyone hoping to traverse realms at will.

The ninja eventually found the Tomb and claimed the crystal, though it was promptly stolen by Morro to free the Preeminent. Before meeting his end, Morro gave the crystal to Wu, who had it guarded in a stronghold in Hiroshi's Labyrinth. The crystal was later stolen by Nadakhan to free his allies from other realms, and it was accidentally shot and destroyed by Flintlocke. The artifact was restored when Jay made his last wish, undoing recent events.

The crystal remained in the labyrinth until it was brought to the basement of Borg Tower. The Oni tapped into the crystal and, through it, returned to Ninjago. Lord Garmadon told the ninja that by destroying the crystal that it may stop the Oni from entering Ninjago, but even after Lloyd Garmadon destroyed it with the Sword of Sanctuary, the Oni kept coming.

At some point in Ninjago's ancient past, the First Spinjitzu Master created the Realm Crystal and had it kept away in his Tomb so no one could have the power to cross between realms at will. After being freed from the Cursed Realm following Garmadon's banishment, Morro sought to find the Tomb of the First Spinjitzu Master to claim the Realm Crystal and unleash the Preeminent.

Throughout the season, the ninja pursued Morro, who had possessed Lloyd, across Ninjago in a desperate quest to make it to the Tomb before him.

Through the use of R.E.X., the ninja arrived at the Tomb first and claimed the Realm Crystal. However, Morro arrived shortly afterward, threatening to harm Lloyd if they didn't give him the artifact. Kai threw Morro the Crystal but using his element heated up the artifact—prompting Morro to drop it, and Lloyd, into the river below. While the ninja managed to save Lloyd, the Crystal moved downriver until falling down a waterfall—yet Morro flew down and obtained the artifact before departing with it.

Now in possession of the Realm Crystal, Morro went to Stiix and using the artifact released his closest allies, Wrayth, Soul Archer, Bansha, and Ghoultar, before conjuring all the prisoners of the Cursed Realm. The ghosts occupied Stiix, taking over the city while the ninja tried sneaking into it in an attempt to find and destroy the Realm Crystal.

After Nya, who is wearing Lloyd's suit, is captured by Morro and reveals herself, she incapacitates many of his allies using her element while Lloyd makes his way into Ronin's pawnshop—where the Realm Crystal is being held. With help from Ronin himself, Lloyd makes it inside and tries destroying the artifact, but is stopped by Morro, who reminds Lloyd of his father and that destroying the Crystal will prevent the two from seeing each other again. This distracts Lloyd long enough to be pulled into the Cursed Realm by the tentacles of The Preeminent, which emerges from the portal into Stiix.

The Preeminent and the ghosts wreak havoc on the city, while Lloyd and Morro fight over the Realm Crystal and use the artifact to travel between multiple realms, including the Cloud Kingdom and the Realm of Madness before Morro claims the artifact and escapes back into Ninjago—leaving Lloyd trapped in another dimension.

As The Preeminent is about to destroy the steamboat which carries all the city's citizens, Nya summons her water element and uses it to drown the colossal beast, killing it and dissolving all the Cursed Realm's prisoners. Morro tries escaping but is caught by one of the creature's tentacles and pulled towards the ocean. Wu tries to help Morro and pleads for him to take his hand so he can do so, but Morro accepts his fate and hands the artifact to Wu before being dissolved by the sea.

Using the Realm Crystal, Wu brought Lloyd back into Ninjago.

At some point, Master Wu gave the artifact to Cyrus Borg, who had it hidden away in a stronghold in Hiroshi's Labyrinth.

After being freed from the Teapot of Tyrahn by Clouse, Nadakhan yearned to free his crew from the realms they were stranded in. He discovered that the artifact was hidden away in Hiroshi's Labyrinth, and immediately set off to claim it.

Nadakhan arrived at the stronghold that kept the Realm Crystal but was faced with multiple obstacles, including Security Droids. Despite the high-quality security system in the vault, Nadakhan eventually succeeded in retrieving the artifact.

Nadakhan used the Realm Crystal to rescue his crew of Sky Pirates from the realms they were imprisoned in. He would later use the crystal to reach Djinjago, only to use it shortly after to return to Ninjago after the realm began to collapse.

The Realm Crystal was kept on the bridge of Misfortune's Keep. However, when Flintlocke tried to shoot Cole, his bullet went right through the Earth Ninja's ghostly form, instead of hitting the Realm Crystal and shattering it apart. Incidentally, the last means of traveling to other realms was destroyed.

Between Skybound and March of the Oni

Garmadon and Lloyd went into the black cloud to destroy the crystal. However, The Omega, the leader of the Oni, came out of the crystal and defeated them.

Lloyd shattered the crystal with the Sword of Sanctuary in an attempt to stop the Oni's invasion. It proved useless, however, as the Realm Crystal was only the "key" used to open the gateway.

An ancient artifact crafted by the First Spinjitzu Master, the Realm Crystal is the ultimate means of traversing the Sixteen Realms, with each facet acting as a doorway to an individual realm. In use, it summons portals to other realms that others besides the user can access. Likewise, its powers are so great that, if given time, it can even transport pocket dimensions such as the Preeminent.

However, the Realm Crystal has its limits, as it's unable to access the Departed Realm. Likewise, it's vulnerable to physical damage, such as a bullet, and can be shattered. The crystal can also be taken over by outside sources, as the Oni were able to take control of it to enter Ninjago.

Morro using the Crystal to open a portal to the Cursed Realm.

The Realm Crystal within its vault at the Hiroshi's Labyrinth.

Nadakhan using the Realm Crystal to free his crew.

The Infovision on the Realm Crystal.

The Realm Crystal in March of the Oni

The Realm Crystal in the Possession mural.

Nadakhan holding the Realm Crystal in the Skybound mural. 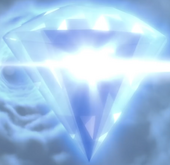 Retrieved from "https://ninjago.fandom.com/wiki/Realm_Crystal?oldid=648618"
Community content is available under CC-BY-SA unless otherwise noted.