After Prime Empire was created

The Meaning of Victory
71708 Gamer's Market

Red Visors are troopers that were part of Unagami's army in Prime Empire. They were programmed to obey Unagami and wipe out anyone who opposed him.

Prior to Prime Empire

To advertise the Prime Empire video game, the Red Visors were featured in an old commercial.[1]

As Jay tries to warn the racers about the Speedway Five-Billion, the Red Visors show up and start shooting at him, forcing him to run, with them pursuing him.

The Red Visors continue their search for Jay when they run into Scott. They try to arrest him but he resists by fighting them off and escaping in his car, which Jay is hiding in the back of. A high-speed chase ensues as the Red Visors pursue the two in their cars. The chase ends with Jay helping Scott to escape and the Red Visors crashing their vehicles.

Part of Jay and Scott's plan to escape the streets involves them disguising themselves as Red Visors. They run into trouble when they are forced to identify themselves. Scott calls himself Red 27, which checks out until the real Red 27 shows up and the Red Visors pursue the two once more. They manage to escape, prompting the Red Visors to argue about who has to tell Unagami about their failure.

The Red Visors appeared in some of the arcade cabinets when a police officer was taking away a Fist to Face game cabinet.

A group of Red Visors march towards the ninja and attempt to kill them, but the League of Jay save the ninja. Sometime later, the ninja get down the skyscrapers and spot Red Visors ahead. Lloyd, Nya, and Cole hide but Kai, thinking there are unlimited lives in Prime Empire, stands out and taunts the Red Visors. He is shot and respawns after the ninja place tires in the Red Visors.

The ninja were led into a cubed room by Ritchie, who tells them that there's a glitch in the game they can take advantage of. When the ninja enter, Red Visors appear and begin shooting at the ninja. The ninja lose seven of their lives until Okino enters and saves the ninja and allows them to escape.

One of the Red Visors cuts Cole's rope and he is barely able to make it before his rope snapped in half. Meanwhile, all of the ninja are able to make it to the top with Lloyd grabbing a Red Visor. When they interrogate him, they realize that Unagami is building a machine that will allow him to enter Ninjago.

The Red Visors surround the ninja after they were trying to enter the Speedway Five-Billion. The ninja are able to defeat them, but Jay uses his credits to get a weapon upgrade causing them to need more credits.

The Red Visors enter the Dance Room and encounter the ninja. Kai, Cole, and Lloyd fight in the background, and some Red Visors even enter the dance floor to interfere with Nya and Jay. While they are fighting, Cole does the Triple Tiger Sashay to take out three Red Visors.

Just after the ninja leave, the Red Visors report that the ninja were able to enter the race. Unagami then commands them to find Scott, believing he can lend them cars for the race.

Lloyd is chased by the Red Visors who come into the stands. Lloyd uses Racer Seven's helmet to deflect their laser and climbs onto a pole where he is surrounded by Red Visors. Lloyd does a backflip and lands on a Speeder Car where he is able to escape.

When Lloyd is talking to Racer Seven, she threatens to call the Red Visors if he doesn't leave.

Red 29 is spying on Scott's garage and sees Racer Seven enter the garage along with Scott and the ninja. He then orders for more Red Visors to back him up.

The Red Visors enter the race to chase after the ninja. They surround Nya's vehicle and are about to crush it, but Nya intentionally slows down causing the Red Visors' cars to crash. She then accelerates and knocks one off the tracks.

When the ninja and Racer Seven win the Speedway Five-Billion, the Red Visors attempt to stop the ninja from leaving, so Racer Seven steps in their way telling them that they are coming for Unagami.

The Red Visors are marching around Terra Technica as the remaining ninja of Lloyd, Nya, and Jay try to avoid them.

When Unagami completes the Manifestation Gate, all of the Red Visors head to the Temple of Madness and enter the portal. As Unagami was able to enter using the Empire Dragon, some of the Red Visors attack Jay. However, he summoned the Blue Dragon and defeated the Red Visors.

While Unagami was attacking Ninjago City during his invasion, the Red Visors were teleported as well and attacked the citizens of Ninjago City along with the Whack Rats. After Unagami reformed himself, he briefly shut down the Red Visors, who returned to Prime Empire after the NPCs were offered to stay in Ninjago or not.

Cole was fighting against the Red Visors while he was playing Prime Empire. 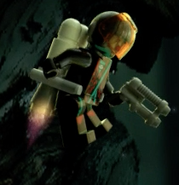