View source
watch 01:33
Wiki Targeted (Entertainment)
Do you like this video?
Play Sound
“
If you have a problem, take it up with them.
— The restaurant owner directing Dareth to Chen's thugs in "Ninja Roll"
„

Vincent Tong
The Restaurant Owner[1] is the presumed owner of the Chen's Noodle House located in Ninjago City.

The Restaurant Owner was manning the cash register during the ninja's meeting at the Ninjago City noodle house. When Eyezor and two other thugs arrived, the owner played along with their robbing of the restaurant, which resulted in the ninja interfering.

A few days later, Dareth visited the noodle house at night seeking Puffy Potstickers. The owner of the restaurant was once again manning the register while Eyezor and several thugs were unloading fresh goods from the factory then. When Dareth began to protest that the puffy potsticker had been discontinued, the owner advised him to bring it up with Eyezor.

The Restaurant Owner is an elderly man who sports a teal button up shirt and hat, and a red bowtie. Due to age, he has visible wrinkles and gray facial hair. 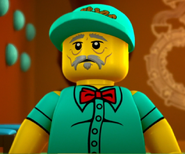 Dareth talking to the owner.