View source
watch 01:25
Jurassic World: Dominion Dominates Fandom Wikis - The Loop
Do you like this video?
Play Sound
“I don't think their boney butts will be bothering us for a while.”
— Nya about the Skulkin

Return to the Fire Temple is the fifth of six mini-movies, taking place directly after the pilot episodes of Ninjago: Masters of Spinjitzu. It aired on Cartoon Network in the Fall of 2011.

Kai and Nya are out on a flight with Flame when the fire Dragon suddenly takes a detour, flying down to the Fire Temple. Seeing Flame nudging Kai along, Nya predicts that the dragon must want to show them something. Within the temple, the trio comes upon a secret entrance leading to the Underworld—an entrance overrun with Skulkin under the command of Wyplash.

Kai accidentally falls down a small cliffside, alerting the Skulkin to his presence. The Red Ninja uses the Sword of Fire to quickly disarm them, but they pick Kai up afterward, causing him to drop his weapon. Kai attempts to use Spinjitzu to shake the Skulkin warriors but to no avail. Nya then flies in on Flame to help Kai, but he denies that he needs it, claiming he's simply formulating a plan. She ignores his protests and Flame blasts a fireball at the Skulkin, forcing them to drop Kai and retreat back into the Underworld. The blast causes boulders to collapse and block off the secret entrance, which Nya states they won't have to deal with the Skulkin for the time being before she, Kai, and Flame leave. When Kruncha and Nuckal later come back, they begin blaming each other for "leaving the stove on." 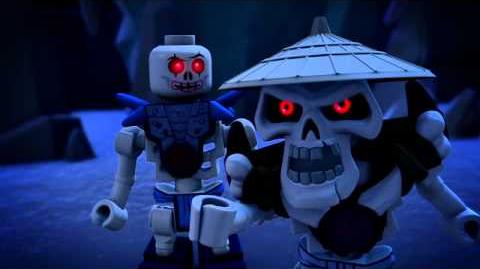