View source
watch 01:25
Jurassic World: Dominion Dominates Fandom Wikis - The Loop
Do you like this video?
Play Sound
“He's the best parts of you put together. Part Jay, part Cole, Joel!”
“But my name is Robo Usher 3000.”
— Nya and Robo Usher 3000, "Codename: Arcturus"

Brent Miller
Robo Usher 3000 (nicknamed Joel by Nya) is a robot who works at Chan's Theater.

The Robo Usher 3000 was performing its duties at the theater while Nya was being forced to choose between Jay and Cole. Nya panicked and picked up the Usher, proclaiming she chooses the droid. She dubbed it "Joel," saying it is the best of both of them. The Robo Usher was less enthused by this and wanted to get back to its job.

When the ninja were called to the top of Borg Tower, Nya brought it with them, but she reluctantly let it go back to the theater.

The Ninjago City Police drove past a building with an advertisement for the Robo Usher 3000. 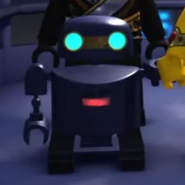 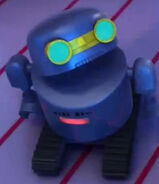