“
And the Rock Cycle isn't fast enough to outrun those beetles!
— Cole in "The Belly of the Beast"
„

Intact
The Rock Cycle is a Ninja vehicle owned by Cole.

The ninja were planning to go to the Desert of Doom on a quest, and P.I.X.A.L. surprises them with the vehicles she built. After exploring the hangar bay, they took the Land Bounty as well the Dirt Bike and the ATV into the Desert of Doom. After some traveling, The ninja parked their vehicles in an oasis where they relaxed until they encountered Beohernie. They were able to escape the beetle; however, a key component from the Land Bounty was ingested meaning the vehicle could not operate.

Having to retrieve the component from Beohernie, the ninja use Zane as bait while tying him up to the Dirt Bike which they use as a winch so they could pull him out of Beohernie's belly. Once Zane found the component, the ninja pulled Zane from Beohernie, but the beetle fought back causing Cole to fall out of his vehicle and onto the sand where two more beetles begin to attack, but they are repelled by the ninja. Eventually, Kai shot fireballs at Beohernie's belly which allowed Zane to escape the belly of the beast.

With the component recovered, the ninja loaded the Rock Cycle and the Katana 4x4 into the Land Bounty and outran the other scarab beetles before heading to their next destination, the pyramid.

After P.I.X.A.L. saved the ninja, they ride back to Ninjago City using their vehicles that took them to the pyramid.

While Fred Finely is reporting, he is picked up by an Elemental Cobra and nearly devoured; however, the ninja arrive in their vehicles and defeat the Elemental Cobra. After Finely tells the ninja where Aspheera is, the ninja immediately leave the scene.

While chasing the Mechanic, Cole uses his Rock Cycle to chain down the Noodle Truck and prevents him from escaping.

The Rock Cycle was at the hangar bay when P.I.X.A.L. was walking over to Lloyd, who was using the base's computer to look at the Kryptarium inmates.

Cole uses the Rock Cycle in an attempt to stop Miss Demeanor, managing to damage two trucks before quickly jumping off when the truck she was on almost crashes into him, but hits the Rock Cycle instead. It is unknown what happened to it after that, though it was seen intact after getting hit.

Ride into the Desert of Doom with NINJAGO® ninja Cole’s Dirt Bike! Power over the sand with its caterpillar treads and big rear wheel with gold-colored rims. Team up with Kai to battle against Pyro Destroyer. Fire the ninja bike’s stud shooters. Fend off Pyro's scimitar attacks with the ninja warriors' katanas, reclaim Cole's LEGO® NINJAGO golden hammer and then continue your quest to find the Ancient Pyramid! You can make up your own thrilling stories or recreate exciting action from the NINJAGO TV show with this awesome LEGO set.[1] 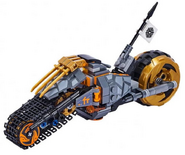 In a promotional poster for Secrets of the Forbidden Spinjitzu